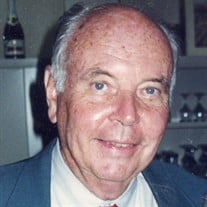 Born in Brooklyn, N.Y. to William and Alice Tierney in 1931, Bill Tierney spent his early childhood years sheltered from the horrors of the depression that had hit the country just two years before his birth. His family moved to West Hempstead, Long Island when Bill was five years old. He and his two brothers appreciated their childhood neighborhood where they played sandlot baseball, pickup basketball and enjoyed each other’s and their playmates’ company. This wholesome upbringing contributed greatly to the wonderful man he grew to be. Bill graduated from Chaminade High School in Mineola, NY and attended Mount St. Mary’s College in Emmitsburg, MD. After two years at the Mount, Bill felt a strong call to serve God. He entered the Seminary of the Immaculate Conception in 1952 and was ordained 5 years later. As one of the first priests to be ordained for the newly formed Diocese of Rockville Centre, Bill was selected to attend Catholic University of America where he earned a JCL degree. He then worked in the Tribunal and in the bishop’s office. In 1971, Bill was assigned to St. Dominic’s, a small suburban parish in Oyster Bay not far from his childhood home. In addition to his duties as a parish priest, he became involved with the high school sports programs and often could be found participating in pep rallies or playing basketball with the students. He quickly earned their trust and made himself available to talk with them whenever needed. While Bill felt his vocation called him to the priesthood, it was soon apparent that God had another plan for him. At St. Dominic’s, he worked closely with parishioners, students and teaching staff and it was there that he met Pat, who was to become his wife of 45 years. They were married in Jacksonville, Florida in 1976 and together they spent over thirty years making the world a better place by working with educational and social justice programs within the Catholic Church. Upon their arrival in Jacksonville, Bill was tapped to serve as the director of the Regional Office of Catholic Charities. Bishop John Snyder shared with Monsignor Haut that he had been seeking a man of faith to lead this invaluable program and he knew that Bill was, indeed, a man of deep faith. In 1983, Bill was appointed Diocesan Director, a position he held until his retirement in 2005. All the while, he lovingly supported his wife, Pat, in her educational career in the Diocese of St. Augustine, which led to her ultimately being named as Superintendent of all Diocesan Catholic schools. Bill definitely lived the essence of Matthew 25: 40. “Truly, I tell you, whatever you did for one of the least of these brothers and sisters of mine, you did for me.” Providing solace to those on death row, setting up programs for immigration, organizing three HUD housing plans for low-income families, and initiating a diocesan food bank were among the many ways that Bill showed us all how to live the great commandment, “Love thy neighbor as thyself.” Over the years, Bill touched many lives. Humble, calm, grateful and, above all, a true gentleman, he loved his four golden retrievers and all sentient life. A true theologian, his book selection was expansive, and he delved fervently into the topics he loved - theology, scripture, spirituality and above all, the Mystery of God. He shared this passion with Karl Rahner S.J. as his guide. And, for 25 years, he was a member of the Brown Bag Theologians, a group of friends who shared lunches and discussed hundreds of books to enhance their spiritual journeys and willingness to share. Poets, mystics, theologians, popular spiritual writers - all had a place at their lunch table! Additionally, for the past 15 years, Bill and Pat have participated in “Falling Upward,” a group devoted to discussing many different aspects of spirituality. Predeceased by his parents and brother, John, Bill is survived by Pat, his beloved wife of 45 years, his brother, Tom, and sisters-in-law, Pat and Kathy Tierney. He was “Uncle Bill” to Tommy, Jennifer, Kerry and Brendan Tierney, Patty Sanford, Katherine Sanford Schrock, and Mary Sanford and great-uncle to Kyle and Dylan Rukab, Cassidy Tierney, and Henry Schrock. The celebration of Bill’s life will be held at San Jose Catholic Church in Jacksonville, Florida on November 13th. Visitation will begin at 11:00 am and be followed by a Funeral Mass at Noon. At the conclusion of the Mass, a reception will be held in the Parish Hall. In lieu of flowers, contributions in Bill’s memory can be sent to Catholic Charities of the Diocese of St. Augustine, Central Administration, 3100 University Blvd. S. #121, Jacksonville, FL 32216.

Born in Brooklyn, N.Y. to William and Alice Tierney in 1931, Bill Tierney spent his early childhood years sheltered from the horrors of the depression that had hit the country just two years before his birth. His family moved to West Hempstead,... View Obituary & Service Information

The family of William J. Tierney III created this Life Tributes page to make it easy to share your memories.

Send flowers to the Tierney family.