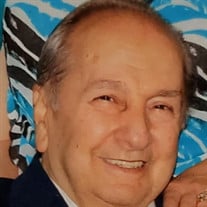 William Bahige Najem (2/20/33-1/19/22) passed away peacefully at home surrounded by his family. He was a loving husband to JoAnn Abood Najem, father of Lawrence (Gina), Paula Sleiman (Joseph), Camille Snober (Yacoub O.), grandfather of 8 loving grandchildren: Nicole, John and Emily Najem, Joseph, William and Alexander Sleiman, and Edward and Alexis Snober. William is survived by Albert (Raymonda) Jeanette Abood (James – deceased) and Nehme (Lillie). He was a loving brother to the late Henri(JoAnne) ; the late Violette Saluan (Maron-deceased) the late Maurice (Henriette) ; the late John (Diana). William was born in Beirut, Lebanon, leaving home at age 17 to attend College and engineering school at the Centre d’Etudes Mathematiqes et Physiques at the Catholic University of Lille in Lille, France. He then moved to Cleveland, Ohio where he attended John Carroll University earning his Masters degree in Physics. It was in Jacksonville, Florida that he met his bride of 59 years, JoAnn Abood. William and JoAnn move to Jacksonville in 1963 where they were blessed with three wonderful children and a life devoted to family, faith and celebration. William worked as an Electrical Engineer with Reynolds Smith and Hills for over 30 years; then became a consultant with Smith and Gillespie Engineering for over a decade. Throughout his life, William was proud of his Lebanese heritage and culture, enjoyed overseas travel and cherished quality time with his kids, grandkids, nieces, nephews and extended family. The family will continue William’s tradition of Lebanese cooking, trying hard to duplicate his flair for hummus and kibbeh! He was instrumental in mentoring many young professionals pursue their careers. He also co-founded the Lebanese American Club in Jacksonville. William touched the lives of many and will be remembered for his generosity, dedication to his family, and love of life. We would like to extend our gratitude and appreciation to Dr. Louis Akra and his staff for their dedication to William’s care. Due to Covid , the family will attend private services at St Maron‘s Catholic Church with a burial at Oaklawn Cemetery, Jacksonville, Florida. Arrangements being provided by Corey-Kerlin funeral home. Donations may be made to St. Maron's Catholic Church in memory of William Najem.

The family of William B. Najem created this Life Tributes page to make it easy to share your memories.

Send flowers to the Najem family.