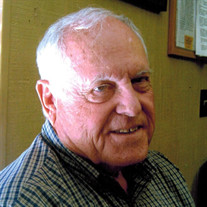 CLARKE - On the morning of January 31st, Dr. William P. Clarke passed away peacefully in his sleep. A life-long resident of Duval County and Jacksonville, he was most closely associated with the Arlington area. He is survived by his wife, Bobbie Hubbartt Clarke, his children Michael H. Clarke, Wendey C. Landkrohn, Richard P. Clarke, his brother Capt. Richard W. Clarke and three grandchildren, Andrew W. Clarke, Richard A Clarke, and Lauryn S. Landkrohn. Dr. Clarke was born in February, 1930 and lived in the Springfield area with the family until they moved to Arlington in 1941. He graduated from Arlington Elementary School in 1942 and lived through the eventful wartime years while attending Landon Junior/Senior High School. In those years he enjoyed adventuring on the St. Johns River, held onto good grades at Landon and lettered in both football and basketball. In 1948 he graduated and went on to a pre-med study program at the University of Florida. Literally working his way through college, he was a success in pre-med studies while participating in campus theatrical productions. He graduated from the University of Florida in 1952 and went on to medical school at the University of Tennessee in Memphis, Tennessee. In the summers he held interesting jobs such as meeting inbound tanker ships to test for volatile vapors and on one summer working construction building an addition to what then was known as the Boys’ Home in Arlington. As he progressed through medical school, he did summer work for a pharmaceutical firm that had him hitch-hiking around the country representing that firm. He was a member of the Alpha Kappa Kappa Medical Fraternity while attending medical school. One of the most important things in his life, while in medical school was meeting and marrying his wife, Bobbie Mae Hubbartt no easy thing while struggling through the demanding medical curriculum. In 1956 he graduated from UT Medical College and took his family back to Jacksonville where he started his medical career as an intern at the Duval County Medical Center. One of the good aspects of that was his pleasure at his first opportunity to deliver a patient’s baby. In 1958, he was ready to strike out on his own, so he set up a practice as a General Practitioner in Arlington, a practice that he continued with success for himself and his many patients until he retired in 2008. Dr. Clarke was very active in his profession as a member of the Duval County Medical Society, the Florida Medical Association, the Florida Academy of Family Practice (Secretary-Treasurer and Vice President), and the Duval County Academy of Family Practice (President). Though retired, he remained active professionally, advising on medical matters and continuing medical study programs right up until the time of his death. Dr. Clarke’s life was active and by some accounts adventuresome. As a youth he was fascinated with aviation, so started flying in 1964. He had his first solo flight August 16, 1964, soon earning his Private Pilot’s License. In 1967 he went on to achieve his license in gliders as well as earning his instrument rating and Commercial power plane license. With those accomplishments he was able to share travel experiences with his family to many parts of the U.S., Mexico and to what then was British Honduras where he assisted for several years in a medical clinic (Flying Physicians). He had genuine depth of aviation experience, having flown at least 35 different types of power planes and gliders. However, his true aviation love and activity was flying the high-performance gliders known as “sailplanes.” Owning several different types over the years, he became a skilled competitor in more than fifty competitions all over the U.S. He and his wife, Bobbie, became a well-known team at these contests where he would be flying while Bobbie followed his progress driving the tow vehicle with the large glider trailer behind. As part of his love of aviation he was a booster of anyone else interested in flying, and, with friends, founded the North Florida Soaring Society (NFSS), an active club based out of Jacksonville’s Herlong Recreational Airport. At the NFSS his affectionate nickname was “Uncle Billy,” a recognition of his always encouraging those around him to be the best they were capable of. Dr. Clarke led an active life originating in hard work. He was a skilled and caring doctor for his patients, a loyal friend, an athlete, and a person involved in continual, personal improvement. He has left his mark, a good one, on his family, his colleagues, his friends, and on the Jacksonville community. In lieu of flowers, please donate to your favorite charity in his memory, if desired.

CLARKE - On the morning of January 31st, Dr. William P. Clarke passed away peacefully in his sleep. A life-long resident of Duval County and Jacksonville, he was most closely associated with the Arlington area. He is survived by his wife, Bobbie... View Obituary & Service Information

The family of Dr. William Parker Clarke created this Life Tributes page to make it easy to share your memories.

Send flowers to the Clarke family.