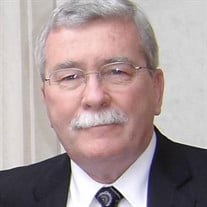 William (Bill) John Hughes, Jr., age 77, passed away due to complications from surgery on Saturday, October 30, 2021, in Jacksonville, Florida. Bill is survived by his wife, Lynda Hughes; his son, William (Bill) John Hughes III (Jill), of Norman, Oklahoma; grandson William and a large and loving family including siblings John Hughes (Pat), Barbara Strobl (Jack), Brenda Wilson (Larry), Shelia Roebig, Paula Horn; brother-in-law Claude Marsh; sisters-in-law Barbara Woodworth, Louise Daniel and Shirley Foltz, and wonderful nieces and nephews. He is preceded in death by his parents William John Hughes, Sr. and Annie Hughes; father-in-law Wilbur (Bill) Ray Foltz, Earl C. Hall (step-father-in-law) and Mary Foltz Hall (Mother-in-law); sibling Pat Hughes Marsh, brothers-in-law Don Roebig, Neal Freel, Mike Horn, Billy Ray Foltz, and Larry Woodworth. Bill was born in Kearney, New Jersey and later moved to Jacksonville where he attended Assumption Catholic School, Bishop Kenny High School, and Jacksonville University before joining the U.S. Coast Guard. He spent most of his career at Independent Life where he worked in accounting for 19 years. Bill had a second career at the Florida Department of Health, Bureau of Vital Statistics where he continued to work until his death. Bill was 19 when he met a beautiful 16 year-old Lynda Foltz. They married in February of 1966, and the couple had one son. Bill and Lynda enjoyed a strong marriage of 55 years. As they walked through the many seasons of life, they shared the joys and sorrows and stood together always, loving each other to the end. Bill cherished his son and was present for him, never missing a sporting event, celebration, or special milestone in his son’s life. He was a wonderfully supportive father. Bill was blessed with a dear daughter-in-law, Jill, and grandson, William, who brought great joy to his life. Bill was a fun-loving, joyful man who was deeply dedicated to his faith as a member of San Jose Catholic Church. In his younger days he was active in many sports including playing softball with Independent Life. He enjoyed golfing, watching sports, listening to good music, and spending time with dear friends and family. Bill adored his family near and far. His family will always remember him as a peacemaker who brought loved ones together and a masterful storyteller. Bill was a loyal and steadfast friend who always showed up to help. He had the gifts of good conversation, quick wit and compassion. He fought a courageous battle with cancer and survived four years cancer free. Bill left us with beautiful memories of a life well lived, echoes of his laughter, and the comfort of his love. He will truly be missed. Visitation will be held on Friday, November 19, 2021, from 6:45 p.m. to 8 p.m. including a Rosary at 7:30 p.m. at San Jose Catholic Church, Jacksonville Florida. A funeral mass is scheduled for Saturday, November 20, 2021, at 11:00 a.m. at San Jose Catholic Church with a burial at Oak Lawn Cemetery and a reception to follow. All are welcome to attend and celebrate Bill's life. In lieu of flowers the family requests memorials in Bill's name be made to the American Cancer Society. Flowers or condolences may be sent to Corey-Kerlin Funeral Home, 940 Cesery Boulevard, Jacksonville, FL 32211.

The family of William (Bill) John Hughes Jr created this Life Tributes page to make it easy to share your memories.

Send flowers to the Hughes family.