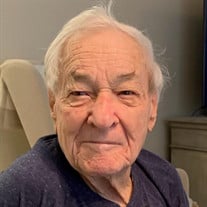 Walter E. Mock, Sr., 94, went home to his Lord on March 6, 2021. Walter was born in St. Marks, Florida, on September 30, 1926. As a youngster in St. Marks, he began his strong work ethic working on Party Fishing Boats in the Gulf of Mexico, out of St. Marks, and for his grandfather on his farm at a very early age of 13 years old. He shares stories of those times, and how he began buying all his clothes at that early age, with his parent’s physical support of a roof over his head and food on the table. Walter enlisted in the Navy at the age of 17, before he had graduated High School. He was allowed to return home to finish his Senior year, reporting to Naval Air Station, Jacksonville, FL, just a few days after Graduation. In the Navy, Walter attended Parachute Riggers School in New Jersey and returned to Jacksonville to serve his time. Walter’s time in the military was approximately 18 months during World War II. When he left the Navy, he attended Massy Business College in Jacksonville, where he met his first Wife. They began their 31-year marriage and had three children. Most of Walter’s Career was with Paramount Pictures Corporation (now Viacom) In Jacksonville, Florida. For a short period, he did work in the Retail Food Industry with his brother-in-law who owned convenience food markets around Melborne, FL & Tallahassee, FL, in the early 60’s. However, Walter soon returned to Jacksonville and Paramount Pictures, where he retired in the late 1980’s. Walter was an avid outdoorsman, enjoying fishing, hunting and working in his yard. He had a very outgoing personality and was known for his Story-telling capabilities. He had married his second wife in 1983 after becoming widowed. In their retirement years they enjoyed splitting their time between Astor, Florida at Parramore’s Fish Camp, and their home in Jacksonville. While at Parramore’s, they made many lasting friendships and fished around the Lake George area and waterways. Walter is preceded in death by his parents, Onie & Walter Elbert Mock; his two wives, Leatha Irene (Renie) Mock and Dorothy Mock; Brother, Britt Mock and Sister, Marie Collins. He is survived by his Sister, Shirley Boykin; Children, Walter E. Mock, Jr. (Kristen), Ronald B. Mock Sr. (Linda), Brenda Yates, Robert Davalt (Patty), Alan Davalt (Stacey), 7 Grand Children and 13 Great-Grand Children. Funeral services will be held at 10:00 a.m.; Wednesday, March 10th at Corey Kerlin Funeral Home on Cesery Blvd, with a Private Interment for the Family at Arlington Park Cemetery, Jacksonville, Florida sometime later with full Military Honors. In lieu of Flowers, please make donations to The Shriners Hospital for children in his name if you would like.

Walter E. Mock, Sr., 94, went home to his Lord on March 6, 2021. Walter was born in St. Marks, Florida, on September 30, 1926. As a youngster in St. Marks, he began his strong work ethic working on Party Fishing Boats in the Gulf of Mexico,... View Obituary & Service Information

The family of Walter E. Mock created this Life Tributes page to make it easy to share your memories.

Send flowers to the Mock family.