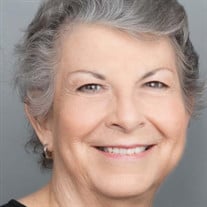 Sandra "Sue" Ashby was born September 19, 1940 in Danville, IL to Jack W. and Barbara Current Shotts. Sue graduated from Danville High School in 1958. She married her high school sweetheart Paul David "Dave" Ashby (1940-1996) and they lived in Catlin, IL and Danville, IL before moving to Portland, OR in 1970. Sue fought a ten-year battle with cancer and passed in her home surrounded by family on November 15, 2021. Sue loved to read, knit, sew, quilt, travel, and spend time with and cook for her family. Her Texas sheet cake and meatloaf were fan favorites. Sue loved music. She had a beautiful voice and sang in her church choir, where she was always an active member. Sue had a passion for volunteerism, which began at the age of 3 when she accompanied her mother and grandmother as a Salvation Army Gray Lady during World War II while her father was away at war. Sue served the St. Vincent's Hospital Volunteers Guild in Portland, OR, for over 20 years. Upon moving to Jacksonville, FL in 1997 after the death of her husband, she directed her energy to the Jacksonville Symphony Volunteers Guild, acting as Guild President for three terms, chair of the Showhouse, and ultimately serving in an advisory capacity as a Board Member Emeritus of the Guild. She was also a delegate and very active in the League of American Orchestras. Sue and Dave had two children: Jeffrey David Ashby (1961-2014) and Jacqueline Ashby Carson (Dale), Jacksonville, FL; five grandchildren: Alyssa Ashby, Naples, FL, Jack Ashby, Orlando, FL, Samantha Kervitsky (TJ), Orlando, FL, Holly Ashby, Newberg, OR, and Nicholas Staab, Atlanta, GA; two great grandchildren: Blake Matthew and Andrew George Notdurft, Naples, FL. She is also survived by her sisters Carolle Girouard (Ron), Danville, IL and Barb Leach, Savoy, IL A memorial service will be held Saturday, December 11, 2021 at 11:00 a.m. at St. Marks Lutheran Church, 3976 Hendricks Ave, Jacksonville, FL 32207. In lieu of flowers, please consider a donation to Lutheran Social Services of Northeast Florida or the charity of your choice.

The family of Sandra "Sue" Ashby created this Life Tributes page to make it easy to share your memories.

Send flowers to the Ashby family.