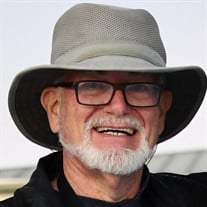 Samuel George Oates, Jr., 75, of Jacksonville, Florida passed away peacefully on February 25, 2021, surrounded by his family. Sam was born on April 2, 1945 in Memphis, Tennessee to Samuel Oates, Sr. and Christine McNutt Oates. The oldest of three brothers, he was drafted into the Army in 1967 (by his own father). He was commissioned after Officer Candidate School, volunteered for a combat tour in Vietnam, and achieved the rank of Captain. Sam was awarded the Bronze Star Medal for his actions during the war. Upon returning from Vietnam, Sam enrolled at the University of Florida and graduated with a Master’s Degree in Architecture. During this same time, he met the love of his life, Laura Nussbaum. They were married in 1969 and had 3 children. In 1975, Sam made the most important decision of his life--trusting Jesus as his Lord and Savior. From that point on, he dedicated himself to showing God’s love through his relationships with people. He is survived by his wife of 51 years, Laura; brothers Phillip Oates (Karla) and Dale Oates (Georgeann); children Michael Oates (Gisela), Rachel Snyder (Chris), and David Oates (Karen); and 12 grandchildren: Michael Christopher, Jason, Christina, Caleb, Daniel, Anna Kate, John, Lauren, John Parker, Emily, Allison, and Courtney Rose. In lieu of flowers, please send donations to the Ortega Presbyterian Mercy Ministry https://ortegapres.churchcenter.com/giving (Select Mercy on drop down). A memorial service will be held 3/6/21.

The family of Samuel George Oates Jr created this Life Tributes page to make it easy to share your memories.

Send flowers to the Oates family.