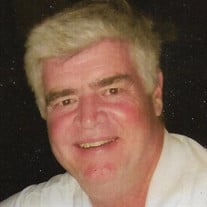 Roy John Coyle passed away unexpectedly February 20, 2022. Roy was the fifth child of Robert W. and Mary B. Coyle (both deceased). He was the grandson of George P. and Mary D. Coyle (both deceased) and nephew of Jack Coyle (deceased), also predeceased by his sister, Nan. He is survived by his wife Martha A. Coyle, his daughters Rebecca Berthold (Matthew) and Sarah Kanaszka (Chase) and his two grandsons Hunter Roy and Cameron Andrew Berthold. He is also survived by his siblings Pat (Cindy) Birmingham, AL, Bill (Joyce) Bryceville, FL, Terry (Betty Ann), Joe (Sandra), Vincent (Ruth Ellen), Mary Ellen Nellie Starling and Virginia Marie Ginny Richey (Steve) and extended family Anne Coyle (Aunt), many cousins, nieces: Christy, Kelly, Mary Elizabeth, Candace, Ellen, Meg, Clare, Elie, Katie and nephews: Philip, Preston, Ron, Jody, Michael, Kevin, Mathew, and Sean Patrick. He was predeceased by Nan Coyle. Roy was a graduate of Sandalwood High School (’75) and Missouri Western State University (’79). Roy played football at Sandalwood and went on to play football on the offensive line at Highland Junior College in Highland, Kansas before transferring to Missouri Western State University. He was a member of the team that won the Boot Hill Bowl (’79), the first bowl game won by the college’s football team. Roy and his teammates on that bowl winning squad were inducted into the MWSU Football Hall of Fame in 2010. Roy was an Eagle Scout along with his father and five brothers. Roy continued to be active in scouting for many years and served as scoutmaster of Troup 5 at Christ the King Catholic Church for most of the 1980’s. He served on the district level. Roy worked in the automotive processing and transportation sector for his entire career. He worked for World Cars, Inc (a division of JM Family Associates), Kia Motors America, Allied Systems and Hansen and Adkins Automotive Transport. A Visitation will be held on Monday, February 28, 2022 from 5:00 p.m. to 7:00 p.m. at Corey-Kerlin Funeral Home, 940 Cesery Blvd. A Funeral Mass will be held at 10:00 a.m. on Tuesday, March 1, 2022 at Resurrection Catholic Church, 3383 University Blvd., Jacksonville, FL 32211 with Father John Reynolds as Celebrant. The family requests that in lieu of flowers, donations may be made to the Scouts B.S.A.

The family of Roy John Coyle created this Life Tributes page to make it easy to share your memories.

Send flowers to the Coyle family.