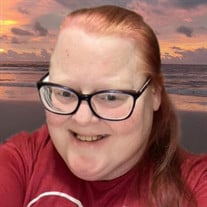 Romney Michelle Stierheim went to her eternal rest on September 12th, surrounded by the love of her family and friends in Jacksonville, FL. She was born Romney Michelle Nunley on March 29, 1973, to James F. and Patricia Nunley in Memphis, TN. The Nunleys relocated to Jacksonville in 1978. There the family flourished by growing strong roots in local sports, where Romney played soccer and softball; their community; and their faith at Prince of Peace and Resurrection Catholic Churches. She was well known for her love of music, bright colors, and the people in her life. Romney graduated from Douglas Anderson School of the Arts in 1991. An early role in technical support at America Online spurred her interest in video games and technology and introduced her to her husband of nearly 21 years, Matthew Stierheim. Her career continued to center around the places where people and tech come together and included significant time at Wachovia and Duval County Public Schools. Romney was also well known for her love of fun, games, and a challenge. For many years, Romney dealt poker and was an integral part of the Southeast Hold‘em family, where her joy in the game and those who played at her tables was legendary. An avid gamer, Romney enjoyed adventuring with others in many online worlds, often with a core group that included her husband, best friend, youngest brother, and son. She loved to go cruising with her family and enjoyed seeing new places and meeting new friends along the way. Wherever Romney was, there was music to be heard - karaoke was one of her favorite ways to spend time with her family and friends and she sang with her son in the River City Men’s and Women’s Chorus. Romney is survived by her husband, Matthew, and sons Justin Nunley and Jimmie Stierheim; her mother, Patricia Nunley; her parents-in-law, Brady (Jay) and Deborah Stierheim; uncles Dennis (Martha) Mitchell, Jimmy (Sandy) Nunley, and Joe (Ruby) Nunley; siblings James (Jay) Nunley (Shannon), Amanda Sartor (Nicholas), Thomas Nunley (Sarai); brother-in-law, Anthony Stierheim (Cassandra); nieces Addison and Alyssa Nunley; many cherished cousins; her beloved dogs, Bella and Tali; and her closest friends, Julia Havener and Tony Crisp. An enormous number of extended family members and friends from all over the world and all walks of life will miss her deeply. In lieu of flowers the family requests donations in Romney's memory to Community Hospice, Alice & T. O'Neal Douglas Center for Caring. Funeral Mass will be held at 11:00 a.m. on Thursday, September 30, 2021 at Resurrection Catholic Church, 3383 University Blvd N, Jacksonville, FL 32277.

Romney Michelle Stierheim went to her eternal rest on September 12th, surrounded by the love of her family and friends in Jacksonville, FL. She was born Romney Michelle Nunley on March 29, 1973, to James F. and Patricia Nunley in Memphis, TN.... View Obituary & Service Information

The family of Romney Michelle Stierheim created this Life Tributes page to make it easy to share your memories.

Romney Michelle Stierheim went to her eternal rest on September...

Send flowers to the Stierheim family.