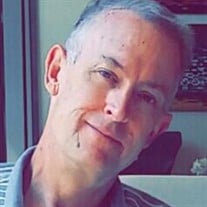 Roger Gregory Robertson II was a devoted father, husband, son, and friend. After a 3 year battle with cancer, Roger passed away on September 9th, 2021 in Jacksonville, Florida at the age of 60. Through his struggles, Roger exemplified what it meant to be a Godly man. His deep rooted faith armed him with unwavering strength, dignity, and courage. Roger is predeceased by his father, Roger Gregory Robertson and his brother David Scott Robertson. He is survived by his mother Marilyn Grace Robertson, his sister Kerri Robertson Levin, his wife Donna Pitman Robertson, his children Ryan Scott Robertson and Allie Marie Robertson, as well a large extended family. Roger was born on May 14th, 1961 in Waukegan, Illinois to parents, Roger and Marilyn. In 1971, the family relocated to Jacksonville, Florida where he spent the remaining years of his life. Here, Roger met his loving wife, Donna, through mutual friends. The two quickly fell in love and were married 3 years later surrounded by lifelong friends and family who have remained by their sides. Beginning in 1983, Roger devoted his adult life to independently building his business, Freedom Satellite Systems, from the ground up. Roger was the type of man who never accepted no for an answer and his overwhelming list of accomplishments serve as proof. In addition to running a business and supporting his family, one of Roger’s most valued accomplishments was obtaining his pilot’s license. HIs business is now run by his son who will continue to uphold it to the highest standard. Roger was the father to two children who he cherished above anything. He spent countless hours with his son, who he shared a passion for baseball with. Through this found passion, Roger became known to many, and will be remembered as “Coach Roger”. He supported his daughter academically as she continues to reach new goals through her schooling. He loved to tell anyone and everyone of her career plans and remarkable accomplishments. Words cannot express the pride he had in his children. Roger was loved by many and left lasting impressions on those around him. His unconditional kindness and selfless nature served as an example for all. A celebration of life will be announced at a later date. In lieu of flowers, the family requests donations be made to the organization of your choosing in Roger’s honor.

Roger Gregory Robertson II was a devoted father, husband, son, and friend. After a 3 year battle with cancer, Roger passed away on September 9th, 2021 in Jacksonville, Florida at the age of 60. Through his struggles, Roger exemplified what it... View Obituary & Service Information

The family of Roger Gregory Robertson II created this Life Tributes page to make it easy to share your memories.

Send flowers to the Robertson family.