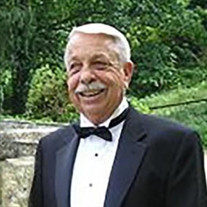 Roger Leland Harris, JR. (9/30/43 to 8/8/2020) Major Roger Leland Harris, Jr., USA, Ret., age 76, entered into rest on Saturday, August 8, 2020. Roger was born on September 30, 1943 in Carnegie, Oklahoma, to the late Juyne and Roger Leland Harris, Sr. Major Harris proudly served in the United States Army for nearly 22 years where he was a helicopter pilot. He served two tours in Vietnam as a scout pilot and received numerous commendations- including the Bronze Star Medal-1 OLC (Heroic or meritorious achievement or service in a combat zone), National Defense Service Medal, Good Conduct Medal, Republic of Vietnam Service Medal, Air Metal (Numeral-22), Republic of Vietnam Campaign Medal, Army Commendation Medal (1 OLC) (Distinguishes himself by an act of heroism, extraordinary achievement, or meritorious service which has been of mutual benefit to a friendly nation and the United States.) and numerous other medals to include Senior Army Aviator Badge, Army Service Ribbon, Armed Forces Reserve Medal, Overseas Service Ribbon (1 OLC), Republic of Vietnam Gallantry Cross w/Palm, Marksman with Riffle and Meritorious Service Medal. A true soldier and leader, Major Harris was a valiant, courageous and gallant officer in the United States Army. After retirement from the military, Roger embraced a career in the health care field, retiring as Administrator for Americare Home Health Care. Roger was always behind the scenes and often up front helping his wife, Brenda with her international art career. Roger loved traveling. His most treasured vacation spots were Jacksonville, Beach and Brian Head, Utah. He loved football, boating, skiing (water and snow), and riding his Harley Davidson. To say he was an avid Jacksonville Jags fan would be an understatement of the century…he loved every pass, every kick and every down of every season! And he chose to share that enthusiasm with a large group of like-minded football friends. Roger was a true reveler and never missed an opportunity to join or create a party. He never saw a stranger and was always up to toast a few with his friends. His was the house where no one was a stranger and everyone was included in the fun. Roger is survived by his loving and devoted wife of 44 years, Brenda Collier Harris; his sons Roger L Harris III, and Jeffrey Scott Harris; and proud papa to granddaughters Hollie Ann Harris and Breanna Helen Black. He will be greatly missed by brothers Gaylen Harris, Scott Harris, Vyrl (Bo) Harris, and sister-in-law, Linda Harris. Roger is also survived by many wonderful friends who were like family and who will raise a glass for Roger for years to come. Roger was pre-deceased by his daughter Jamie Lynne Black. A Committal Service with full Military Honors will be held at Jacksonville National Cemetery, on Friday, May 6, 2022 at 2:30 p.m. In lieu of flowers please help someone in need or someone seriously affected by Covid-19.

The family of Roger Leland Harris Jr created this Life Tributes page to make it easy to share your memories.

Send flowers to the Harris family.