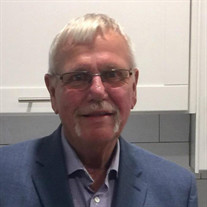 On Thursday, April 8, 2021, Robert Alexander “Robbie” Scott, III, loving husband and dad passed away at the age of 67. Robbie was born on August 4, 1953, in Jacksonville, Florida to Robert A. Scott, Jr. and Florence (Peek) Scott. Robbie grew up on the Jacksonville’s Eastside where he made many lifelong friends. Before retiring in 2016, Robbie was a local and long-haul truck driver most of his career. He enjoyed playing football in his youth and was passionate about his Florida Gators. Robbie’s father introduced him to stock car racing at an early age. From the moment he first went to the track, he was hooked – Go Ford! Robbie deeply loved his family, friends and pets. His family and friends will always remember his smile, laughter and distinctive voice. He was always there for them in times of celebration and in times of need. His dogs and cats, Oliver, Mattie, Smokey and Shirley miss his attention, love, and comforting touch. Robbie was preceded in death by his father, Robert, his mother, Florence, and his brother Freddy Stringer. He is survived by his wife Susan, his three children, Scott Skipper (Christy Bonafede), Danielle Smith (Joshua), and Wesley Butler (Kristen McMinn), his sister, Marlene Blair (Bill), 10 grandchildren, 8 great grandchildren, and numerous cousins, nephews and nieces. A memorial service will be held at 11:00 a.m. on Friday, April 16, 2021 at Corey-Kerlin Funeral Home, 940 Cesery Blvd, Jacksonville, Fl. 32211 904-744-8422 www.corey-kerlin.com. In lieu of flowers, donations may be made to Friends of Jacksonville Animals at http://friendsofjaxanimals.com/donate

The family of Robert Alexander "Robbie" Scott III created this Life Tributes page to make it easy to share your memories.

Send flowers to the Scott family.