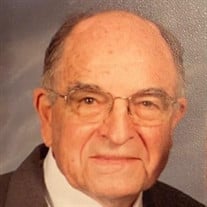 Robert Bryant Mizelle, 90, passed away on July 20, 2021 in Jacksonville, FL. “Bob” was born at St Vincent’s Hospital Riverside in Jacksonville on January 18, 1931 to the late Ruby Bryant Mizelle Parrish and Harry Robert Mizelle. A 1949 graduate of Andrew Jackson High School, Bob joined the US Marine Corp in January 1951, serving for three years, one of which included combat duty in Korea, ultimately obtaining the rank of Staff Sgt. Upon discharge he attended the University of Florida, graduating in 1958 with a Bachelor’s Degree in Mechanical Engineering. While a student at UF, Bob met “the best wife ever”, Gerry, and they married in 1956. Upon graduation they lived all around the southeast: Lake Charles, LA, Knoxville, TN, Covington, VA, Covington, GA, and Thomasville, GA where he worked as an engineer and/or manager in various capacities at various companies. In 1988 they moved back to Jacksonville where he and Gerry built and ran their own business for 18 years. Bob enjoyed family time, boating, tinkering in his garage shop, and watching his beloved Gators. He was a member of Semper Fidelis Society and Arlington Presbyterian Church. Survivors include his daughter Lori (Paul) Digby of Bainbridge, GA, his two sons, David (Dana) Mizelle of Marietta, GA and Tommy (Cindy) Mizelle of Rockaway, NJ; six grandchildren: Daniel Digby, Michelle Digby (Pauncho) Hufstetler, Bryan (Taylor) Digby, Dustin Mizelle, Brooke Mizelle, and Chaz Mizelle; six great-grandchildren: Van, Annabelle, and Alex Digby, Thomas and Emma Hufstetler, and Hampton Digby, several nieces and nephews as well as one brother, Dan (Dot) Mizelle of Birmingham, AL and one brother-in-law, Dennis (Melba) Voelker of Richmond, VA. He was preceded in death by his parents, his wife of 62 years, Geraldine Voelker Mizelle, a brother-in-law, Virgil (Dolores) Voelker, and a sister-in-law, Charlotte (Joe) Haggard. A Committal Service will be held at Jacksonville National Cemetery on Friday, August 6, 2021 at 2:00 p.m. (Lane 1) with military honors. DUE TO THE INCREASE OF COVID CASES, MASKS ARE REQUIRED AND SOCIAL DISTANCING IS REQUESTED. In lieu of flowers, the family requests that a donation be made to Arlington Presbyterian Church at 1351 Sprinkle Drive, Jacksonville, FL 32211, the Alzheimer’s Association act.alz.org, Parkinson’s Foundation www.parkinson.org, or a charity of your choice.

The family of Robert Bryant Mizelle created this Life Tributes page to make it easy to share your memories.

Send flowers to the Mizelle family.