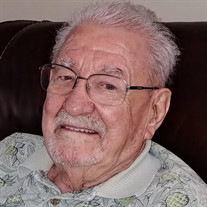 Robert H “Bob” Marquardt, 92 of Jacksonville, Florida, passed away on November 18th, 2020. He was born in Akron, Ohio and has been a resident of the Jacksonville area for almost 52 years. He was a retired, US Navy, CPO, GCA. His naval service began in April 1946 and he retired in October of 1968. From 1969 to 1981 he worked for the FAA as an Air Traffic Controller at the Jax Center, in Hilliard, Florida. He was a member of the Professional Air Traffic Controllers Organization, the Fleet Reserve and the American Legion. He was a man who was loved by his family and by everyone who came in contact with him. He had a quick wit and loved to tell a good, (not always clean) joke. He was devoted to his wife and his family. His integrity and his kindness were a constant throughout his life. He is survived by his loving wife of sixty-nine years, Vivian, his children; Robert (Sandra), Craig (Melinda), Lori (Kevin) Rowland, His grandchildren; Christy, Heather, Natalie, and Dexter, four great-grandchildren, several loving nieces and nephews, and a host of dear friends. Due to Covid-19, there will be a private service at Corey-Kerlin Funeral Home and burial at the Jacksonville National Cemetery, with full military honors, attended by immediate family only on November 30th. At a later date there will be a celebration of Bob’s life with family and friends. In lieu of flowers, per Bob’s wishes, please make donations to Dreams Come True, 6803 Southpoint Parkway, Jacksonville, Florida 32216. He was loved by many and will be missed by all. “After All is Said and Done In the End Integrity is Forever”

The family of Robert H. "Bob" Marquardt created this Life Tributes page to make it easy to share your memories.

Send flowers to the Marquardt family.