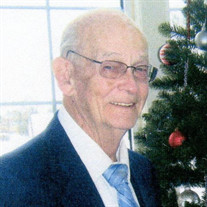 Robert Alton Jones December 23, 1929-January 12, 2021 Robert (Bob) Jones was born in Richmond, Virginia on December 23, 1929 to MacDonald Jones and Lucy Adams Jones. He was the youngest of five children having one brother, Carl, and three sisters, Frances, Tillie and Doris. He married his high school sweetheart, Joann Piehl, after graduating from Andrew Jackson High School in Jacksonville, Florida in June, 1947 and was married until February of 2019 when he lost his bride to cancer. During their 71+ years of marriage they were blessed with five children, one son Robert Jr. and four daughters Malinda, Vivian, Donna, and Sherry, who gave them seven grandchildren who in turn gave them eleven great grandchildren. Family was everything and he taught by example with love and determination. Bob made his living in the construction trade as a union electrician with the IBEW local union out of Fort Lauderdale, Fl. He retired in 1999 and moved to Jacksonville, Florida to be closer to family. He was an avid fisherman and would go fishing every chance he got. He loved going to Sebastian, Florida annually in August to spend a week or two on the water. He cooked and ate his catch for the day and made the best hushpuppies and coleslaw to go with them. Everyone always looked forward to his fish fries. He loved to cook and made most of the family meals, home cooked and with southern style. So many jones family receipts have been handed down through the years. Bob really liked his westerns, whether it was a movie or a book. He could sit for hours and watch movie marathons or read stories about the old west. He had a collection of pocket watches and pocket knives, carried at least one at all times. Bob had touched many lives and was loved by everyone. His family is proud and honored to be a part of him. He was a son, brother, husband, father, grandfather, great grandfather and uncle, and an inspiration to us all. He will be in our hearts forever and leaves us with many fond memories. He will be greatly missed, but never forgotten.

Robert Alton Jones December 23, 1929-January 12, 2021 Robert (Bob) Jones was born in Richmond, Virginia on December 23, 1929 to MacDonald Jones and Lucy Adams Jones. He was the youngest of five children having one brother, Carl, and three sisters,... View Obituary & Service Information

The family of Robert Alton Jones created this Life Tributes page to make it easy to share your memories.

Send flowers to the Jones family.