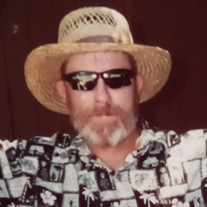 Robert Keith Barnett 57 born June 15, 1963, passed away March 6, 2021, after a lengthy illness. Robert (Keith) was retired. Keith was a carpet installer for many years and loved his job. He was a hard worker he had a big heart and provided for his family. His family meant the world to him. Whatever he did he gave it his all. Keith was born in Palaka, Florida, to Pat Dixon and Oscar Willard Barnett. At the age of 3, he was taken from his mother and given to Marion Doucet who raised him. He moved to Lake Charles, Louisiana, where he attended school and helped out on his family's fishing boat. He later joined the Army. After a short time, he moved back to Jacksonville with his family. He never knew his parents both passed on so did Marion. Keith had a hard life with his family. I believe that's what drove him to be a better family man. Keith met his wife here in Jacksonville, Florida, on October 31, 1985, and married on January 6, 1986. She was 19 and he was 22. They have been married 35 years. He has one son, Robert Keith Barnett Jr, and a daughter, Kristen Fletcher, her husband, Jason, 3 grandchildren, Abby, Jacob, and Samantha. Keith got sick 3 years ago and almost died. He had several heart attacks and COPD. He was brought back to life and put on life support. The doctors gave up hope and his wife was told he was not going to make it. While doctors were encouraging his wife to make a decision to take him off life support, his wife said no and stuck by his side for 4 days. He woke up and improved. When Keith left the hospital the doctors only gave him 2 weeks to live. Two weeks later he was cooking bbq on the grill. Every day since then was a gift from god. Keith accepted the Lord Jesus Christ as his Lord and Savior. These three years have been so wonderful even though his health declined through those years it was still a blessing from god. He will be missed (till I see you again my love) In loving memory of Robert Keith Barnett

Robert Keith Barnett 57 born June 15, 1963, passed away March 6, 2021, after a lengthy illness. Robert (Keith) was retired. Keith was a carpet installer for many years and loved his job. He was a hard worker he had a big heart and provided for... View Obituary & Service Information

The family of Robert Keith Barnett created this Life Tributes page to make it easy to share your memories.

Send flowers to the Barnett family.