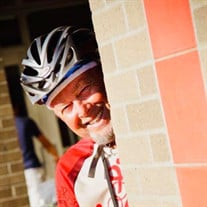 Richard (Sparky) Earl Watts, son of the late Elinor and Carl Watts passed away January 23, 2021 He was born in Miami Beach, FL on November 7, 1933. He grew up in New Jersey and in high school played guard on the football team and was also on the basketball team. He graduated from Grover Cleveland Highschool in 1952. During college Sparky was active in Men’s Wrestling and was a member of the Chi Psi Fraternity. He graduated with a bachelor’s degree in English in 1957 from Wesleyan. As a young man Sparky spent time working as a forest ranger in California. His life-long career was in the insurance industry and he achieved the title of Vice President of Madison National Life from 1990 to 2008. Sparky had a passion for health and exercise. He completed several 15k River Runs in Jacksonville, Florida as well as competing in the Boston Marathon. In his 70’s he began participating in the Wisconsin Act Ride fundraising event which entails biking several hundred miles over four days. He made many friends over the years that he cycled in this event and was often an inspiration to others. During his years spent in Madison, Wisconsin he enjoyed volunteering in a variety of ways. Sparky helped coordinate meals for the homeless and served on the vestry at Grace Episcopal Church of which he was a member. He assisted in organizing textiles at the University of Madison and helped manage a community garden plot for many years. He also traveled to Haiti with a group of volunteers that provided aid in diagnosing problems with eyesight. Sparky was a member of the Lions Club. He especially enjoyed visiting family and friends in northern California at a family mountain home called Rainbow. A highlight was always the camping trips riding horses up into the mountains to stay a few nights under the stars and sharing jokes and stories around a campfire. Sparky had an excellent sense of humor and could easily laugh at himself. He was quite the character and prankster being serious one moment and laughing the next. You never knew what he was going to say and it was often funny. There is no one he would not start up a conversation with. He would go out of his way to speak to someone and offer a kind smile. In June of 2018 Sparky moved back to Florida to be close to his daughters. He enjoyed trips to the library and frequent walks around the neighborhood visiting with friends. We also had many good times visiting St. Augustine over the Christmas holidays each year. He will be greatly missed. He is survived by his daughters Jennifer Watts and Jessica Watts and stepsons Matthew Priddy and James Priddy. He is also survived by his sisters Susan (Dan), Ann (Art) and brother Dick (Heather) and Kenneth along with many cousins, nieces and nephews. In lieu of flowers, donations may be made in his memory to The Goodman Community Center in Madison, Wisconsin. www.goodmancenter.org

Richard (Sparky) Earl Watts, son of the late Elinor and Carl Watts passed away January 23, 2021 He was born in Miami Beach, FL on November 7, 1933. He grew up in New Jersey and in high school played guard on the football team and was also... View Obituary & Service Information

The family of Richard "Sparky" Earl Watts created this Life Tributes page to make it easy to share your memories.

Send flowers to the Watts family.