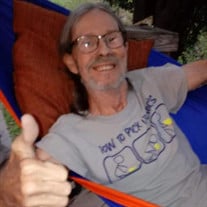 INGRAM - Richard Ingram joined his mother, Myra Lorene Ingram; father, L.M.Ingram; and two departed brothers, James and Jerry Lambert, Friday, September 18, 2020. Our departed left behind a vibrant sister, Cathy Ingram- Hinnant; brothers Mike and Johnny; three dynamic children, Brandy, Jacqueline, and Richard Ingram Jr.; four thriving grandchildren, Tori, Malachi, Sparrow, and Xiola; and four ex-wives, Peggy, Carrie, Annmarrie, and Robbin. He loved watching football, especially if Crimson Tide was playing. He always enjoyed playing music, riding his motorcycle, and talking to anyone willing to listen; but nothing pleased him more than singing to a crowd while playing guitar and drinking a cold one. In his youth he learned to be a carpenter from his father; later in life he became an expert in computer repairs and ran his own business. Still, it could be said, his greatest accomplishments were in his children and grandchildren. Love for our faded companion resides within his friends, family members, and the memories left behind. A memorial service will be held Saturday, November 7th, 2020, at 1:00 p.m. In the chapel at Corey-Kerlin’s funeral home. 940 Cesery Blvd. Jacksonville, Florida 32211.

The family of Richard Lynn Ingram Sr created this Life Tributes page to make it easy to share your memories.

Send flowers to the Ingram family.