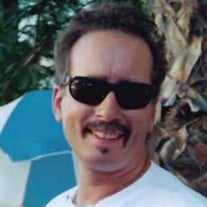 Richard John Downing passed away October 15th, 2021 in Orange Park, Florida with his loving wife of 30 years, Stacey Downing and his loyal and beloved chihuahua, Buddy, by his side. He was 65 years young and is already dearly missed not only by his wife and Buddy, but also by the four kittens he rescued and loved: Jax, Gemma, Cooper and Earl. Rich was preceded in death by his devoted and loving mother, who he missed dearly: Louise Isabel Cidade, from Hawaii, his father: Woodrow Wilson Downing, from Hawaii, his in-laws who loved him like their own son: Yvonne Mae Davis and Donald Robert Davis, his brother Woodrow Downing Jr, and sister Jeanie. Born in Castro Valley, CA he lived 49 years in the Bay Area then moved to Orange Park, FL with his wife and fur babies in 2005 where they have happily resided for the past 16 years. In CA, Rich was a Class of 1974 graduate of Arroyo High School. Always continuing his education, he graduated with a BS in Business from Phoenix University in 2002. An intelligent person with many, many skills Rich earned the nick-name "Tool Time/MacGyver." There was not one thing he couldn't build, fix or "soup up". His employment included: General Contractor, Architect, Police Officer, Private Investigator, Building Inspector and owner of AKM Arms. Rich had his own construction business for many years, Cal-Bay Construction. I want to specifically recognize the time he spent working for HARD (Hayward Area Parks & Recreation District). He made many good friends there including Ben and Laura Whitehouse and Eric Thorton, Kenny Amann, Larry McNealy and Rodney Ferguson. Rich’s loves and interests included spending hours restoring many cars. He even built a 5.0 Cobra motor for his 1966 Mustang Fastback. His other cars included a '58 Porsche 356A Speedster, GTX, and a ‘55 Chevy. He was a member of the Good Guys and won many awards at the car shows. He had several motorcycles over the years and enjoyed time riding with his wife, Stacey. He also enjoyed gun building, a music lover and construction gardening. In closing, I would like to mention that Rich was a believer of God so I know we will see him again. I also know one thing's for sure: in heaven Rich will be giving God a hard time about "improving" or "fixing" the gates of heaven! God will have to find many "jobs" for Rich to fix to keep him out of his hair! All I know is that he is happy to be with his mother and his body is restored! I can’t wait to see you again, my love. In addition to his wife Stacey, Rich is also survived by his daughters, Andrea and Alexis as well as his grandchildren RosaLinda, Ricky and Amaris; his brother, Joseph Downing; sister Louise Auten, and several nieces and nephew’s. His wife will be hosting a celebration of life sometime this summer in both Florida and California. If you would like to express you condolences you can reach Stacey at [email protected] Any charitable donations feel free to donate to the SPCA of CA or Jacksonville Humane Society, as Rich requested.

Richard John Downing passed away October 15th, 2021 in Orange Park, Florida with his loving wife of 30 years, Stacey Downing and his loyal and beloved chihuahua, Buddy, by his side. He was 65 years young and is already dearly missed not only... View Obituary & Service Information

The family of Richard John Downing created this Life Tributes page to make it easy to share your memories.

Send flowers to the Downing family.