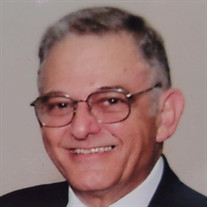 Raymond Emil Tubel went to our dear Lord on May 15th after an extended illness. He was born in Jacksonville on September 14, 1937 and was the eldest son of Emil N. Tubel and Lottie Mallem Tubel. He is survived by his wife of 64 years Patricia Harvey Tubel, his high school sweetheart. To Raymond, his sweetheart was “Tricia” to most she was “Pat”. They both attended Bishop Kenny High School where he was elected Student Body President, President of the Student Council, and King of Homecoming in his senior year. They have been truly blessed in their marriage, family, and career. Raymond was predeceased by their daughter Bernadette Tubel Robison in 2020. They have two sons, Raymond Emil Tubel, Jr. (Kerri) of Jacksonville and Wayne Patrick Tubel (Randy Weiner) of Marietta. Raymond is also survived by his step mother, Dorothy Tubel of Jacksonville, his brother, Edmund George Tubel of Charlotte, and his half-sister Joan Stephens (Mark) of Jacksonville. Raymond is also survived by their four grandchildren Katie Tubel Gabor (Mike), Raymond E. Tubel III (Alexis), Kristy Tubel Trbakovic (Haris), and Joseph C. Robison. Also missing their Ghidi are their seven great grandchildren, Michael, Katelyn, and Jacob Gabor, Raymond IV and Andi Tubel, and Emir and Adam Trbakovic ages from 13 years to 2 months. Raymond and Pat have owned and operated Tubel’s Goodyear stores together for 43 years and are blessed to have long term and loyal managers and employees. Prior to operating their own Goodyear stores, Raymond worked at numerous positions with corporate Goodyear. He left corporate Goodyear in 1978 when he was an Assistant District Manager in Knoxville, TN. He returned home to Jacksonville to open his first Goodyear Store in the Southside. He was a lifetime member of the Knights of Columbus, a lifelong Gator football fan, and a member of the Army National Guard in his youth. Raymond had a great devotion to our Blessed Mother and Her rosary during his life. Visitation will be held at Corey Kerlin Funeral Home at 940 Cesery Blvd on Friday May 21st from 5-7 with a rosary at 6:30 led by Father Jim O’Neal. A funeral mass will be held at the Basilica of The Immaculate Conception 121 E. Duval St. at 9:30am Saturday May 22nd followed by interment next to his daughter at Evergreen Cemetery 4535 N Main St. Following interment, guests are invited to a luncheon at The Legacy Lodge at Hardage- Giddens Cemetery at 4801 San Jose Blvd to celebrate Raymond’s life. His pallbearers are Raymond Jr., Wayne, Raymond III, Michael Gabor, Haris Trbakovic, Robby Pellicer, and John Lewis. Honorary pallbearers are: Edmund Tubel, Kerri Tubel, Eddie Tubel, Steve Tubel, Wesley Tubel, Renee Mackoul, George Cratem III, Joe Mason, Matt Jones, Steve Lawrence, James Crawford, Ben Nieves, David Ferrell, and Coco Colon. Raymond’s great love was his family. May all who knew him remember him for the caring and loving man he was. Again in our lives, we want to thank Community Hospice for their loving care and guidance. In lieu of flowers, please make donations to Community Hospice and Palliative Care @ communityhospice.com or to Christ the King Catholic School for youth through 8th grade @ ctkschooljax.com/Tubel.

Raymond Emil Tubel went to our dear Lord on May 15th after an extended illness. He was born in Jacksonville on September 14, 1937 and was the eldest son of Emil N. Tubel and Lottie Mallem Tubel. He is survived by his wife of 64 years Patricia... View Obituary & Service Information

The family of Raymond Emil Tubel created this Life Tributes page to make it easy to share your memories.

Raymond Emil Tubel went to our dear Lord on May 15th after an...

Send flowers to the Tubel family.