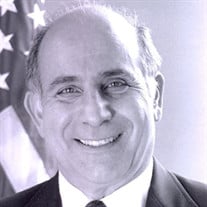 Raymond Anthony Nasrallah passed away peacefully on August 14, 2021, after a brief illness. He was 89. He will be remembered for his quick wit, strong will and generous heart. Ray is survived by his wife of 61 years, Annie Canto Nasrallah, to whom he attributed his life’s successes, and by his children, Karen Virginia Nasrallah, Joseph “Joey” Henry Nasrallah (Ellen) and Mary Pauline Thornton (Patrick); his five grandchildren, Jessica Marie Nasrallah, Joseph “Jay” Anthony Nasrallah, Allison Kate Nasrallah, Ann “Annie” Frances Thornton and James “J.P.” Patrick Thornton III; his sisters-in-law Frances Galifianakis (Manuel), Nellie Flynn (Charlie) and Paula Buzar (Jim), as well as by many nieces and nephews. He was preceded in death by his parents, Habeeb and Franji Nasrallah, his sisters, Mildred Hanna, Virginia McConnell, and Blanche Dennis; and by his son, Raymond Anthony Nasrallah II. The youngest of four children, Ray grew up in Jacksonville, graduating from St. Paul’s Catholic High School in 1950 and the University of Florida in 1954 with a B.S. degree in Business Administration and a minor in Building Construction. He was a loyal Gator fan and could be found any given Saturday passionately cheering his beloved Florida Gators to victory at home or in “The Swamp.” In 1983, he became a member of the University of Florida President’s Council. After college, Ray joined the U.S. Navy and served on the staff of the commander, Naval Construction Battalion’s U.S. Atlantic Fleet from 1955 to 1957. He began his civilian career in the building and construction business with his brother-in-law, John Hanna. In 1963, he and his partner, Henry Price, formed Price-Nasrallah Builders and worked together to build many residential subdivisions, spec-homes, multi-family projects and commercial structures. In 1974, through Price-Nasrallah Builders, they purchased the American Import Lighting Company that Ray owned and operated until his passing. As a continuing education instructor with the Florida Association of Realtor Institutes, he travelled the state of Florida teaching thousands of realtors construction principles and building codes to help them satisfy CEU requirements. Ray became active in the Florida Home Builders Association and, in 1963, became the Florida representative to the National Association of Home Builders and President of the Northeast Florida Builders Association. In 1978, he served as President of the statewide Florida Home Builders Association. In that role, he was credited as the driving force in a grass-roots recruiting effort that made the FHBA the largest building industry trade association in the United States, with more than 10,000 members. In 1980, he was honored as “Florida Builder of the Year,” and in 1994, he achieved the ultimate in building industry recognition: induction into the Florida Housing Hall of Fame. He was a founding member of Executive Risk Consultants, which provided workers’ compensation and health insurance at favorable rates to thousands of FHBA members and generated a wealth of non-dues revenue to support the state association’s advocacy efforts toward more affordable housing. He also served on the Board of Directors of the Community Savings Bank and was president of the Jacksonville Salaam Club in 1969. Ray was a dedicated parishioner of Assumption Catholic Church, volunteering countless hours to help run Bingo, the Spring Bazaar, the selling of Christmas trees, mentoring the Men’s Club, supporting CRHP, and acting as head usher. From 1969 until his death, he was an active member of the Knights of Columbus. Every Sunday at 10:00 a.m. mass, you could find him at Assumption, sitting proudly with his family. He considered his strong faith, devotion and love for his family to be his most important legacy. There will be a Memorial Mass to celebrate his life on Saturday, October 9, 2021, at 11:00 a.m. at Assumption Catholic Church, 2403 Atlantic Blvd., Jacksonville, Florida. Due to the COVID pandemic, a visitation will not be possible, and the family requests that those who plan to attend the mass respectfully wear a mask. He will be buried at the Jacksonville National Cemetery in a private ceremony. The Nasrallah family would like to extend their sincere appreciation to the doctors and nurses of St. Vincent’s Hospital, Southside, for their compassionate and unrelenting care. In lieu of flowers, please send donations to Assumption Catholic Church, in memory of Raymond Anthony Nasrallah, 2403 Atlantic Blvd., Jacksonville, Florida 32207. Please sign the guest book at www.corey-kerlin.com

Raymond Anthony Nasrallah passed away peacefully on August 14, 2021, after a brief illness. He was 89. He will be remembered for his quick wit, strong will and generous heart. Ray is survived by his wife of 61 years, Annie Canto Nasrallah,... View Obituary & Service Information

The family of Raymond Anthony Nasrallah created this Life Tributes page to make it easy to share your memories.

Send flowers to the Nasrallah family.