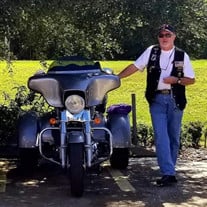 Philip L. Jansen, 79, of Jacksonville, Florida passed away Thursday, August 12, 2021. Phil was a loving husband, father, grandfather, and friend to many. Phil was born on May 9, 1942, to Fredrick William Jansen and Margaret Lenore Bennett Jansen in Indianapolis, Indiana. He attended Assumption Catholic School and graduated from Bishop Kenny High School in 1960. After graduating high school, he attended Hancock College. Phil joined The United States Air Force in 1961 where he served two tours: East Asia and North Africa. He was honorably discharged in 1972. Phil had a very long career in the Ophthalmology field, where he retired after 28 years as the Clinical Director of the Florida Retina Eye Institute. Phil was very proud to be associated with this company and its employees. Phil was a dedicated long-time member of the American Legion as a Legionnaire and was a charter member of the American Legion Riders. He held numerous offices in his many years with Post 283. The American Legion Post 283 was truly his family and his second home. Phil enjoyed playing golf at Mill Cove Golf Club where he organized a game on Sundays, called "Phil's game." Thanks to the love of the sport, he met and married his biggest love, Ella. He had a true passion for the Florida Gators, and rarely missed a game, which made one Saturday very interesting with Ella being an LSU fan. Phil also enjoyed his Miller Lite with friends at the "Post" whom he loved dearly. He enjoyed riding his "Harley" as a member of the ALR. His other interests include a good book, good music, and dancing. Phil is preceded in death by his parents, Fredrick, and Lenore Jansen, one son, Christopher Jansen, one Brother, Jeffery Jansen, and mother-in-law Bessie Falgout. He is survived by his wife, Ella Rae Falgout Jansen; one child, Todd Jansen of Atlantic Beach, Florida, one bonus child; Kam Sons (Chris) of Loranger, Louisiana; one daughter-in-law Suzanne Furget-Jansen of Round Lake Park, Illinois; Kathleen Jansen, mother of his two children; six grandchildren, Megan Lankford, Karen Jansen, Chrissy Brunet, Sean Sons, Ty Jansen, Olivia Jansen; and 4 great-grandchildren with one on the way; two brothers, Fredric Jansen (Vickie) of Anderson, MO; Gregory Jansen (Patty) of Canton, Georgia; sister, Angela Jansen Carter (Jimmy) of Savannah, Georgia; and many nieces and nephews. A Celebration of life will be held on August 28, 2021, from 3pm to 7pm at the American Legion Post 283, 9459 Fort Caroline Road. Jacksonville, Florida 32277. The internment with military honors will be held at The Jacksonville National Cemetery on September 10, 2021, at 11:00am. In lieu of flowers, donations can be made to Pulmonary Fibrosis Foundations via Pulmonaryfibrosis.org.

Philip L. Jansen, 79, of Jacksonville, Florida passed away Thursday, August 12, 2021. Phil was a loving husband, father, grandfather, and friend to many. Phil was born on May 9, 1942, to Fredrick William Jansen and Margaret Lenore Bennett Jansen... View Obituary & Service Information

The family of Philip L. Jansen created this Life Tributes page to make it easy to share your memories.

Send flowers to the Jansen family.