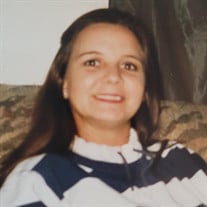 Patricia Ann Reeves “Patty” passed peacefully on May 4, 2021 at the home of her daughter and son-in-law. Her eldest son, Carter and bestie, Amy were by her side as she drew her last breaths. Born on April 15, 1959 in Goodrich, MI to Hazel and Kenneth Austin. Big sisters Diane and Sandy welcomed her to the family. In 1972, the family moved to Atlantic Beach, FL where Diane, Sandy and Patty welcomed new siblings, Brenda and Billy. She attended Fletcher junior and senior high schools. She and best friend Brenda Morgan (Beaver) got up to plenty of mischief and had many good times. She loved the beach, playing softball and partying with friends. She met “Bad Billy Reeves” (as she called him) at Fletcher Sr. and they married in July shortly after her graduation in 1977. She and Billy worked together at the Rite Spot until daughter Hilary came along in June of 1981. Eldest son Carter came along shortly thereafter in January 1983. Patty adored her babies and had fun making homemade Halloween costumes for them. She later worked at Woody’s BBQ as a waitress and went on to successfully manage many locations around Jacksonville. It was at Woody’s that she met life long best friends, Amy and Richard Osbourne, and Rick Viars. She and Rick never married but lived together as a couple for the rest of his life until he passed away from cancer in 2016. Youngest son, Corbin “Zack” came along in May 1993. He was the family’s whole world. Patty and Rick could often be found camping at Ginnie Springs with Amy and Richard. Patty was an advocate and took care of Rick while he was suffering and dying from cancer. She stayed in touch with many dear friends from high school and had many close relationships with work colleagues. Patty’s closest friend throughout her life was her sister, Sandy. Patty was always down for a party and a laugh. Patty was witty, smart and sarcastic. She was fun! She had the best and loudest laugh on the planet. She had the Sunday paper delivered so she could do the jumble and crossword puzzle every week. She could solve every puzzle on Wheel of Fortune and was still solving the puzzles three days before her death (it's a crime she never applied to be on the show). She never lost a game of Scrabble. She could be found almost every weekend at her community pool soaking up the sun, chatting up neighbors and working on her Sudoko puzzles. She loved talking about the deals she got at Winn-Dixie. She shopped at the fine fashion house of Bealls and only ever wore flip-flops. She liked reading Stephen King novels. Every Saturday night was date night with her two favorite men, grandson’s Wyatt and Waylon. Wyatt was grandma’s boy and her best little friend. Waylon was grandpa’s boy. She was a proud “gramma” who regaled her poor co-workers with the latest anecdote about what her grandsons had said or been up to. The earth revolved around them. In May 2020 Patty welcomed only granddaughter, Sailor. She loved snuggling with Sailor and buying her cute clothes. Patty was beautiful (inside and out). She was a bright shining star in this world who cared deeply for others and was cared deeply by many. Patty was first diagnosed with throat cancer in 2019. She was able to beat it with treatment, strength and prayer. Despite 2020 being a so-so year at best for almost everyone on the entire planet, Patty had a lovely year. She regained her health, reconnected with friends, went on vacation with her grandchildren and did a little traveling with her friend Joe. Unfortunately, in January of 2021 she was diagnosed with aggressive squamous cell cancer in her throat and lung. She attempted chemotherapy and immunotherapy early on, but the treatment took too heavy a toll on her. She decided to forego further treatment as a result and spent her remaining time with the ones she loved. She moved to her daughter’s home in April 2020 to spend more time with the ones dear to her (the grandkids!). Patty was welcomed home once more by those who preceded her in death. Her mother, Hazel Marshall; old man, Rick Viars; sisters, Diane Gibson and Brenda Ward; uncle David Buckingham; brothers-in-law, Dugie and John Reeves; and many in-laws. She is survived by her children, Hilary Brown (Kyle), Carter Reeves (John) and Zack Viars; sister, Sandy Austin and brother, Billy Marshall (Tia); brother in law, Hollis Ward; aunt Beverly Buckingham; grandchildren, Wyatt, Waylon and Sailor and many nieces and nephews. In lieu of sending flowers the family asks that you consider making a donation in her name to Compassion International www.compassion.com or Community Hospice and Palliative Care www.communityhospice.com A memorial service will be held on Saturday, June 19, 2021 at 3:00 p.m. in the chapel at Beach Church in Jacksonville Beach. A casual family visitation will be held at 2:30 prior to the service.

The family of Patricia "Patty" Ann Reeves created this Life Tributes page to make it easy to share your memories.

Send flowers to the Reeves family.