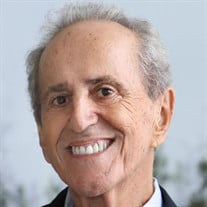 Oneil John Guidry, 77, earned his angel wings on March 18, 2021 when he peacefully went to heaven to be with our Lord. O.J., Papa, Jay and Juice were just a few of the names he answered to by the many people that loved and adored him. O.J. was born at home in Cut Off, Louisiana on October 24, 1943. He was preceded in death by his devoted parents Oneil and Lillie Molere Guidry and his dear brother Roy Guidry. Jay will forever be remembered by his selfless and devoted wife, Linda, and their children Felicia and Michael Fox and Dwight and Amy Olivier. He will be missed greatly by his precious grandchildren Magnolia, Maddox, Millicent, J.D and Michaela Fox and Simone and Raymond Olivier. He will also be lovingly remembered by his brother, Dudley Guidry (Monita R.I.P.), his sister, Annette Triche (Sydney), many nieces and nephews and his adoring large Louisiana family. O.J. was raised in the heart of cajun country in Cut Off, Louisiana and spent his early life “down the bayou” with his family. O.J. proudly supplied oysters to south Louisiana while he owned and operated O.J.Guidry Seafood for 30+ years. In the fall of 1982, he met his beautiful bride, Linda and instantly fell in love. They were married in June 1985, and he moved “up the bayou” to join her family there. He and Linda continued operating their business and raising their children in Thibodaux for many years. He worked diligently to get Felicia and Dwight through school and continued to support all their endeavors along that journey. In early 2006, shortly after Hurricane Katrina, he and Linda decided to spend the majority of their time in Jacksonville, Florida with their daughter Felicia and her family as she was expecting triplets. He treasured every moment of being a grandfather. From carpool pickup, to rocking babies to sleep, to dance recitals, dress up shows and many, many baseball games, Papa was always there. He was blessed yet again with the gift of grandchildren when his precious Simone Louise was born in 2012 and our sweet caboose Raymond Luke in 2016. Through the years, PaPa loved traveling out to Telluride, Colorado where he was able to spend wonderful time with Dwight and his family in the breathtaking mountains. Jay was a fan of all things LSU and Saints, loved watching football and cheering for his teams. He will always be a tiger at heart. He loved old westerns, good movies, big trucks, and Mardi Gras. He founded dancing in the kitchen, could always boogie, and always made people laugh, wherever he was. One of his favorite sayings was “Better to laugh than to cry!”, and he lived that philosophy every day. He cherished his family time more than anything else and was always excited about any opportunity to be together. O.J.’s faith was the foundation of his life. He was a devout Catholic, and he believed strongly in the power of prayer. He carried his childhood rosary in his pocket everywhere he went, and he closed every day in prayer with Linda. He used the challenges life gave him as a testimony of his faith and a mechanism to inspire others. He was a hero to so many through the years, but especially to all his family. A local visitation will be held at San Jose Catholic Church at 3619 Toledo Road in Jacksonville on Tuesday, March 23, 2021 at 6:30 pm followed by the funeral mass at 7:30 pm. There will also be a visitation in Thibodaux, Louisiana on April 10, 2021 tentatively at 10:30 am at Thibodaux Funeral Home followed by a funeral mass at St. Joseph Co-Cathedral at 1:00 pm. Burial will immediately follow at St. Joseph Cemetery. The family would like to thank our caregivers, particularly Denise Crawford, and the entire staff of Haven Hospice of Jacksonville, FL for their excellent care, love and attention given not only to O.J. but to the entire family during this time. In lieu of flowers, the family requests memorials be made in his name to San Jose Catholic School or Haven Hospice of Jacksonville, FL.

Oneil John Guidry, 77, earned his angel wings on March 18, 2021 when he peacefully went to heaven to be with our Lord. O.J., Papa, Jay and Juice were just a few of the names he answered to by the many people that loved and adored him. O.J.... View Obituary & Service Information

The family of Oneil John Guidry created this Life Tributes page to make it easy to share your memories.

Send flowers to the Guidry family.