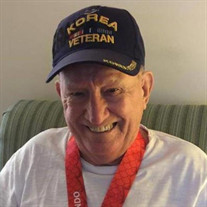 Olen Lee Childers, 87, of Atlantic Beach, FL, passed away on March 7, 2021 after a lengthy illness. A Korean War veteran who served in the Army, he grew up in Thomaston, GA and enjoyed fishing, traveling, cooking, listening to John Denver, watching Westerns, The Eagles music, playing pranks, nature, fixing things, spending time with his grand kids and great grand kids, riding his motorcycle and scooter in his younger days, helping others, singing, having fish frys and cookouts, and having family get togethers. He owned his own business, Acme Brass Company in Smyrna, GA for many years and was also a maintenance supervisor in the Perry School District in the 90s. He is survived by his wife of 43 years, Barbara Childers, his step daughters, Joy, Debbie, Cindy and Terri, his son David, and numerous grandchildren and great grandchildren. Olen didn’t really believe in "steps" in his family and his face would light up with pride and he would say “She’s our daughter” whenever he spoke of any of the girls who were his in his heart. He is preceded in death by his son Mark, his parents Thurman and Roxie Childers, his brother Frank, sisters Kaye and Geneva and many friends. He will be remembered for his great laugh, generosity, kindness, big heart, humor, adventurous spirit, honesty, and work ethic as well as his love of the water, animals and oysters! The family would like to thank the special team of caregivers who cared for him with such compassion: Debi Taylor, Brenda Wing, Marchelle Bunting, Michelle Williams, Visiting Angels, and Community Hospice. We also appreciate the outpouring of loving support from our Community Presbyterian Church family. Olen's memorial service will be held at 11:00 a.m. on Saturday, April 17, 2021 at Corey-Kerlin Funeral Home located at 940 Cesery Boulevard in Jacksonville, FL. Safety and health protocols will be followed. If you feel led to make a donation to honor his memory, supporting any veterans group would be appreciated.

Olen Lee Childers, 87, of Atlantic Beach, FL, passed away on March 7, 2021 after a lengthy illness. A Korean War veteran who served in the Army, he grew up in Thomaston, GA and enjoyed fishing, traveling, cooking, listening to John Denver, watching... View Obituary & Service Information

The family of Olen Lee Childers created this Life Tributes page to make it easy to share your memories.

Send flowers to the Childers family.