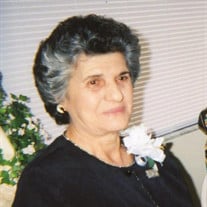 Sadly on Friday January 22, 2021 in Jacksonville Florida Najla A. Kassees passed from this world to the next. Najla was born May 16,1931 to Elias and Nijmeh Akel in Ramallah, Palestine. The older of two children she adored her younger brother Elias Sari. Najla had a childhood rich in Palestinian tradition and spent her youth growing up in the beauty of the Holy Land. In Arabic Najla means “Wide Eyed” which was the perfect name for a women who would see the good even in the very darkest of moments. Najla married her true love Abraham Attallah Kassees in 1948 in Ramallah. In 1949 the couple made the journey to Corpus Christi, Texas. Arriving on American soil by way of a Pan Am Flight. In 1950 they joyfully welcomed the first of 7 children their daughter Cleopatra. Unexpectedly in 1960 Najla's husband Abraham would pass away leaving Najla to raise 7 young kids on her own. She would never remarry and stayed true to him all the days of her life. Grounded by her strong roots she arose to this staggering challenge. Heartbroken but determined still she persisted. Moving to Jacksonville, Florida in 1966. She would provide for her children by owning and tirelessly running Kassees Grocery. She was not just a business owner but rather Momma Kassees. In her store and the streets surrounding it she became a mother to all. Adopting every lost and weary soul she met. Her family dubbed her home “Kassees Hotel”. Her kind ways lead her to taking in any stray human who needed a place to lay their tired head. She dedicated her entire life to her children and large extended family. She was a firm, strong yet extremely loving matriarch to her many Grandchildren and Great Grandchildren. She survived Breast Cancer in her mid-80s with the same style she had survived all of life’s obstacles, without complaint and never stopping. She buried five of her seven children. Three of which passed away within the last 14 months. Her life though long feels cut short. A victim to this terrible pandemic. Just shy of her turning 90 the world lost an extraordinary testament to the greatest generation. Her family and friends lost a temple of strength, a beacon of faith and mostly a piece of our hearts. The great poet Khalil Gibran Said “Oh Heart, if one should say that the soul perishes like the body, answer that the flower withers, but the seed remains.” Her soul is still leading our way. In 1960 her fairytale love story was tragically put on pause but on January 22, 2021 she was once again reunited with her husband. Proceeded in death by her Husband Abraham Attallah Kassees, Her Brother Elias Sari Akel, Her sons Essam Abraham Kassees and Naseem Abraham Kassees, Sr., Her Daughters, Cleopatra Abraham Kassees Shunnarah, TajMaher Abraham Kassees, Dulyla Abraham Kassees and her beloved grandson Naseem Abraham Kassees, Jr. She is survived by her adoring son General Romal Abraham Kassees and devoted daughter, Seham Abraham Kassees Salazar (David). As well as a large extended family made up of many grandchildren, great grandchildren, cousins, nieces, nephews, a sister-in-law, daughters-in-law, and sons-in-law, plus a long list of cherished friends. The family will receive family and friends on Friday, January 29th at 9 am at Corey- Kerlin Funeral Home located at 940 Cesery Blvd Jacksonville Florida 32211 Services will be held at 10 am also at the funeral home with Ramsees P. Kassees officiating, with burial to immediately follow at Green lawn Cemetery, 4300 Beach Blvd Jacksonville FL 32207.

Sadly on Friday January 22, 2021 in Jacksonville Florida Najla A. Kassees passed from this world to the next. Najla was born May 16,1931 to Elias and Nijmeh Akel in Ramallah, Palestine. The older of two children she adored her younger brother... View Obituary & Service Information

The family of Najla Abraham Kassees created this Life Tributes page to make it easy to share your memories.

Send flowers to the Kassees family.