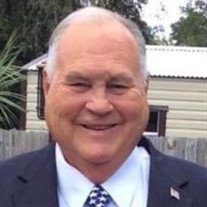 Reverend Miles Alan “Butch” Nelson passed away on Saturday March 27th at Baptist Medical Center in Jacksonville, Florida, peacefully, with his wife Eva at his side. In his final days, from his hospital bed, he worked the phones reaching out to friends and family to say goodbye and to try and soothe their suffering. During that time he also received dozens of calls from former members of his congregation who wanted him to know how much he and Miss Eva meant to them and how impactful their ministry had been to so many lives. Butch was a simple man who loved the Lord, loved his wife, and loved his family. Born in 1944 in Jacksonville, Florida, to a proud Navy veteran of WWII, he was raised mostly in Jacksonville, Florida. After high school he joined the Army and served his country in Germany during the cold war as part of a unit guarding an air force missile installation. Ordained as an Advent Christian Minister, he served his community as a pastor for over 30 years in both Lulu and Jacksonville Florida. During a global pandemic, and while undergoing chemotherapy for cancer, his children asked him to slow down, and he responded by saying that preaching was his calling, and that he would preach until he died. He did just that, preaching as recently as 2 weeks before he passed, even when he lacked the strength to walk to the pulpit or stand while preaching. Preceded in death by his parents, Miles and Louise (nee Brannen), Butch is survived by his wife Eva Mae (nee Marion); siblings Steve, Randy, and Alana; children Shawn (Kristin), Jack (Deborah), and Brenda; grandchildren Michelle, Matthew, Caitlyn, Connor and Cooper; and great-granddaughter Caydence. Funeral Services to be held Thursday April 1st, 10am viewing and 11am service, at Corey-Kerlin Funeral Home, 940 Cesery Blvd., Jacksonville, Florida, with burial to follow at 1:30pm at the Jacksonville National Cemetery In lieu of flowers Miss Eva has requested donations be made to the Advent Christian Village, 10680 Dowling Park Dr., Live Oak, FL 32060

Reverend Miles Alan &#8220;Butch&#8221; Nelson passed away on Saturday March 27th at Baptist Medical Center in Jacksonville, Florida, peacefully, with his wife Eva at his side. In his final days, from his hospital bed, he worked the phones reaching... View Obituary & Service Information

The family of Miles Alan "Butch" Nelson created this Life Tributes page to make it easy to share your memories.

Send flowers to the Nelson family.