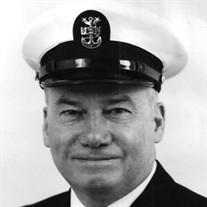 WOOD - Michael Wayne Wood was called home to our Lord and Savior on Wednesday morning, July 21, 2021. He suffered from a broken heart after losing his beloved wife. In coping with that grief, compounded by social and health challenges, his prayers to go home were answered. Michael, also called “Mike”, “Dad”, and “Papa”, will be remembered and missed greatly by those that he left behind. Mike was born to Charles Walter Wood and Margaret Grace Holland in Jacksonville, Florida on November 2, 1935. He grew up in Murray Hill and he graduated from Robert E. Lee High School with vocational training from Plumbers and Pipefitters Union 234. He became a reservist in the Navy Seabees and was called to active duty near the end of the Korean War. After active service, he worked with Henly & Beckwith and W.W. Gay as one of their first employees. In 1958 he married the love of his life Jacquline “Jackie” Francis Flynn, and together they were married for 61 years. They formed Mike Wood Plumbing in 1964, which is still in business today. Mike is well known for his many acts of service — to country, family, friends, community, and his customers as a master plumber. We will remember Mike for his love and service to his country. He remained in the Navy reserve unit RNCB13 (Pride of Dixie) for 34 years. His Navy family was dear to him, and he retired with pride and honor as a command master chief. He was “all hands on deck” when it came to family life. Mike and Jackie were always present for every celebration of life: birthdays, weddings, baptisms, etc. He was always available for advice and was thoughtful with his words. His beliefs were strongly rooted in faith and tradition. Mike had a great passion for his vocation and trade. His responsibilities and loyalty to Local 234 was ever-present in his commitment to apprenticeship training and management. He truly believed in organized labor and loved working for an organization that he considered vital to the plumbing industry. Everyone who worked with him throughout the years was considered as close as family to him. This was always self-evident in the priority he placed on those activities and events. Mike was also a 32° Freemason and Scottish Rite member. Mike is predeceased by his wife Jackie and his brother Wallace. He will leave behind his many acts of kindness as his greatest legacy. He is missed dearly by sons Walter Wood (Dorothy) and Charles Wood (Tammy); grandchildren David Wood (Jessica), Erin Wood (Adrian), Kevin Wood (Jennifer), Summer Wood (Meg), and Kara Wood; and his great-grandchildren Cameron Wood, David Wood II, Wilder Marchi, and Dylan Wood. Memorial and graveside services are to be held at St. Joseph’s Historic Catholic Church 4124 Lorretto Rd. Jacksonville, FL 32223 on August 14 at 10:00 a.m.

WOOD - Michael Wayne Wood was called home to our Lord and Savior on Wednesday morning, July 21, 2021. He suffered from a broken heart after losing his beloved wife. In coping with that grief, compounded by social and health challenges, his prayers... View Obituary & Service Information

The family of Michael Wayne Wood created this Life Tributes page to make it easy to share your memories.

WOOD - Michael Wayne Wood was called home to our Lord and Savior...

Send flowers to the Wood family.