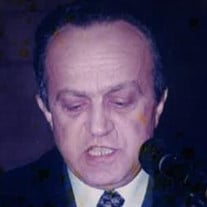 Maroun El-Khoury - Maroun El-Khoury, beloved husband, father, grandfather, teacher, lawyer and historian, age 71, formerly of Kour, Lebanon, passed away Tuesday, October 19, 2021 in St. Johns, FL, USA. Maroun was born in Kour, Lebanon to Father Maroun El-Khoury and Marie Matta (aka “elkhouryieh”) on January 6, 1950. He went to school at Mar Abda Ghazir, Lebanon, then college at University of St. Joseph in Beirut, Lebanon where he studied Theology. He graduated from the Lebanese University with a degree in Law. He married Hayat Ghanem on February 9, 1979. He practiced law and taught History and Civics for over 40 years at Saint Joseph’s School in Cornet Chehwan, Lebanon and Saint George, Zalka, Lebanon. He is known to generations of his high school students as “Imbrator” (“Emperor”). He served as a volunteer legal counselor for several religious and charitable organizations, including Caritas Lebanon, Mar Mansour and Mar Mikhael. He loved his hometown, Kour, for which he published “Kour Aljindi”, a historical review of the town’s origin and people. Kour is where he loved to spend most weekends and would be seen walking its streets, playing cards or tawleh (backgammon) with childhood friends. As much as he loved his hometown and country, Lebanon, he loved his family even more (especially his grandkids), and would often say when asked if he considered the U.S. or Lebanon his home now: “Ma7al ma l wled, hiye el bled” (“Home is where the family is”). He died in his “home” away from home. A visionary that saw way ahead of his time, he was blessed with convictions and a voice that would shake earth and heaven itself. He had a larger than life persona. The last emperor has fallen… L’ultimo imperatore è caduto… Preceded in death by his parents and two brothers, Salim and Youssef El-Khoury. He is survived by his spouse, Hayat Ghanem, their three sons and their wives, Serge El-Khoury and Clara Antoury, Ralph El-Khoury and Barbara Yanez, Joe El-Khoury and Nora Proops, two grandsons, Luca and Noah El-Khoury, and his siblings Bassem, Warde, Jean and Sayssaban El-Khoury. If desired, friends may make memorial contributions to a cancer society of their choice. Funeral services will be held at 11 am on Saturday, October 23, 2021 at St. Maron Catholic Church, 7032 Bowden Rd, Jacksonville, FL 32216. Burial will follow at St. Joseph’s cemetery. Mercy meal will follow at St. Maron Catholic Church hall.

The family of Maroun El-Khoury created this Life Tributes page to make it easy to share your memories.

Send flowers to the El-Khoury family.