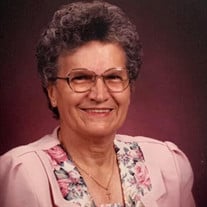 On November 6, 2021, Margaret Louise Bodden Gressman went home to be with her Lord and Savior. She was 88 years old. She was preceded in death by her loving husband Bradford, her parents Ainsley and Louise Bodden, her sister Betty Jackson (Ralph) and her brother Lionel aka “Bumps”. Margaret was married to Bradford Gressman, the boy across the street. He was a Merchant Seamen. Their first year of marriage, they spent only 3 months together. Sadly, in 1986, after 30 years together, he passed away unexpectedly. She never remarried. As a result of his job and passing, she played the role of both Mother and Father to their two sons. while working at Seacoast Appliance and later at Walmart as a People Greeter for 15 years, until she retired in 2007. She provided a Christian and loving home with no complaints or back talk. They were everything to her. Her pride in them and their five grandchildren showed in her beautiful smile. Margaret was born on September 24, 1933 in Grand Cayman, BWI. She graduated from Triple C High School, also in Grand Cayman in 1956 and would marry later that same year. In 1958, they were blessed with their firstborn “Jr.” aka Marcus. In 1971, they were blessed with their miracle, second born Ronnie. Marcus married Tami and gave Margaret her first of five “Precious Ones”, Corbin her “miracle angel”. Three years later, Ronnie married Kim and blessed her with four more beautiful babies; Clay, Jace, Brett and Hayden “Baby Doll”. They were her world. There was nothing she wouldn’t do for any of us. In addition, she was survived by her beloved nieces and nephews: Vernon, Larry, Randy, Charlie, Patsy, Gail, Helen, Catherine, Jane, Lana, Robert, Margaret, Dorothy and Kathleen. A viewing will be held Tuesday, November 9th from 5:00 p.m. - 7:00 p.m at CoreyKerlin Funeral Home 1426 Rowe Avenue Jacksonville. A Memorial Service will be held on Wednesday, November 10th at 11:00 a.m. at Dinsmore Baptist Church Family Life Center, 10500 Old Kings Road North, Jacksonville with internment immediately following at Jones Road Cemetery, Callahan.

On November 6, 2021, Margaret Louise Bodden Gressman went home to be with her Lord and Savior. She was 88 years old. She was preceded in death by her loving husband Bradford, her parents Ainsley and Louise Bodden, her sister Betty Jackson... View Obituary & Service Information

The family of Margaret Louise Gressman created this Life Tributes page to make it easy to share your memories.

Send flowers to the Gressman family.