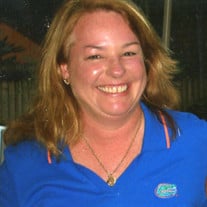 Loretta Carol Herbert died peacefully on July 22, 2021. She was born in Chicago, Illinois on October 21,1960 the sixth of eight kids. Loretta came to Jacksonville at age 8 when her father moved the family to manage the transformation of the port of Jax. The port became a powerhouse of the import of automobiles from around the world starting with Toyota over 50 years ago. Her father’s vision inspired Loretta. She was an adventurous child searching the banks of the St Johns River collecting Timucuan pottery shards and along the nearby beaches, shark teeth, skeletal remains, and seashells. She acquired a wealth of knowledge of Florida history and delightfully shared what she learned using items from her own collection. In 1979 she graduated from Terry Parker High School and in 1983 from Jacksonville University with a degree in Pre-Columbian Art History. Loretta began her professional career as a harbormaster in Charleston SC and Jacksonville’s Ortega Yacht Club Marina. She made a bold change training as an apprentice in the jewelry trade eventually becoming an accomplished custom design jeweler working at various locations locally for 35 years. Thousands of people wear her original designs. Not surprisingly many of her designs were inspired by the flora and fauna of Florida that she so loved. Nature was one of her greatest friends, leading her to become a lifelong avid gardener and a competitive sport fisherwoman while keeping her fishing poles, crab trap, and shrimp net handy at all times. Always quick with a joke, a story or a song Loretta was well-loved, not just by her family but just as importantly, her countless friends. Her door was always open where she hosted countless gatherings, big and small, whether joyful or sad. And always by Loretta’s side was her beloved partner, Michael Davis, and their sweet pup, Barkley. Her vivaciousness, zest for life, and the many who love her will serve as an example of a life well-lived. Loretta is predeceased by her parents, George B. and Elaine R. Herbert, her brother, Gregory Herbert, and her nephew, Christopher Micek. She is survived by 6 siblings: George D. (Sallie) Herbert of Longwood FL; Janice Micek (Rod Martin) of Charlotte NC; Marian (Gregory) Kelley of Tucker GA; Gloria Herbert of Jacksonville FL; Frank (Kimberly) Herbert of Middleburg FL; Cate Newman of Washington DC; sister-in-law Kathy( Gregory) Herbert of Boca Raton; Nieces and Nephews - Berta (Will) Hendry, Catherine (Kia) Thomas, Lyndon Herbert (David Fogel); James (Robin) Micek, Evan (Laura) Micek; George A. Herbert, Hunter Strong; Charles Kelley, Cecilia (Lee) Priday, Fergus (Piper Hale) Kelley, Lydia (Michael) Sharp; Adam and Alex Stanny; Josh (Tarra) and Olivia Herbert, Keith Newman; Great-Nieces and Nephews - Ash Hendry; Isaac Fogel; Logan and Ashlyn Micek; Finley, Nola, Wayland Micek; Michaela and Ellie Micek; Freya Priday; Imogen Sharp; Damien, Aubrey, Colby Herbert. Visitation will be held Saturday, August, 14, 2021 from 10-11am at Corey- Kerlin, 940 Cesery Boulevard, Jacksonville, FL, 32211. Interment to follow at 11:30 a.m. at Arlington Park Cemetery, 6920 Lone Star Road, Jacksonville, FL 32211.

Loretta Carol Herbert died peacefully on July 22, 2021. She was born in Chicago, Illinois on October 21,1960 the sixth of eight kids. Loretta came to Jacksonville at age 8 when her father moved the family to manage the transformation of the... View Obituary & Service Information

The family of Loretta Carol Herbert created this Life Tributes page to make it easy to share your memories.

Send flowers to the Herbert family.