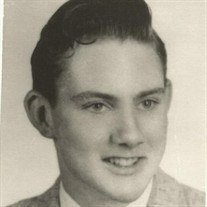 On Saturday, May 22, 2021, LeRoy Daniel McIntosh, loving brother, husband, father, and grandfather passed away in a long battle with cancer at the age of 78 and is now resting in peace at his Lord’s side. LeRoy was born on December 31, 1942 in Brooklyn, NY to Elmer and Margaret McIntosh. While growing up in (Bay Ridge) Brooklyn, NY he loved spending his summers in New Albany, NY at Mini and Bob’s (grandparents) farm. He graduated from Fort Hamilton HS in June 1960 and went on to study Agriculture Sciences at a college in New York but changed his mind and left to study Computer Programming at a technical school in New York. LeRoy also served in the New York National Guards in the Reserves. On July 12, 1969, in Greenwich, CT, he married a lovely Peruvian, Norma Leoniza Morales. They raised one son, Timothy, and three daughters, Anne Marie, Carolyn, and Kathleen. He came up with the group name T.A.C.K that is still being used today. LeRoy eventually left computer programming, but he worked many different jobs to make sure his family was always provided for, including being the sole founder of his own mail center, Post-N-Tele, in which he operated 6 days a week for a few years. As the years went by, he loved spending time with his children and grandchildren and was a devoted member of the Knights of Columbus and San Jose Catholic Church. He was known for his dedication to his entire family, dependability, and understanding. He loved learning about his Irish and Scottish heritage and traveled overseas every chance he got. LeRoy was preceded in death by his father, Elmer, and his mother, Margaret. He is survived by his wife Norma, his four children; Tim McIntosh (Uli), Anne Marie McIntosh, Carolyn Overfield (Tim), and Kathleen Hunter (Stephen), his five grandchildren; Hannah, Ronan, Faith, Liam and Cullian, his two brothers; Donald McIntosh (Dee Dee) and Bill McIntosh (Anne), and so many cousins, nieces, and nephews. A funeral service will be held on Wednesday, June 2nd, 2021, at San Jose Catholic Church on 3619 Toledo Road at 3:30 p.m. In lieu of flowers, please send donations to St. Jude Children’s Hospital @ www.stjude.org.

On Saturday, May 22, 2021, LeRoy Daniel McIntosh, loving brother, husband, father, and grandfather passed away in a long battle with cancer at the age of 78 and is now resting in peace at his Lord&#8217;s side. LeRoy was born on December 31,... View Obituary & Service Information

The family of Leroy Daniel McIntosh created this Life Tributes page to make it easy to share your memories.

Send flowers to the McIntosh family.