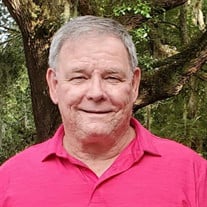 Kenneth L. Cofield of Jacksonville, Florida was known to others as Kenny, Big Dog, Papa, Darling, Kenny Bear, Super Jit, The Man Without Shoes, Kenny the Real Deal Cofield, and Dad. He we home to be with the Lord on April 23, 2021 at 7:45am. After a three week fight with pneumonia and Covid-19 he decided that Heaven was a better address than the hospital. Born in Hiawassee, Georgia on September 10, 1961, to Robert and Erlene, he was the third of many siblings. He later moved to Panama City Florida where he graduated from High School. He received a bachelor’s degree in Theology from Luther Rice College & Seminary. A jack of all trades, his favorite job above all was cooking for his family—and let it be known, he could make the best fried green tomatoes in the world. His dream job was to be director of a Transition House which he named the Regina House. In his free time, he and his wife Cathy felt called to prison ministry where they incorporated a 501(c)3 called Save a Man Ministry. He preached every weekend to inmates and let them know that the saving love of Jesus Christ could bring them freedom here on earth. He taught that release from prison wasn’t the ultimate freedom, but that final freedom was found in Heaven. This hope message inspired many to follow Jesus. He gave his all to his prior two jobs, including House of Hope in Gainesville, FL and Christian Healing Ministries in Jacksonville, FL and was extremely grateful for the opportunities to work at these two places. Kenny is best remembered by his generous spirit, his work ethic and integrity, his compassion for his family and friends, his kindness, his “get it done” attitude, his love for his wife Cathy, and his love for Jesus. He is survived by his wife Cathy, his daughters Shanna Cofield Waters and Stephanie Moreland, his son Jason Cofield, and numerous grandchildren. He is also survived by his sister Catherine Cofield Elliott, his brothers Robert Lewis Cofield Jr., Daniel Ernest (Ernie), and Donald Thomas (Donnie) Cofield. His brothers Keith Wayne Cofield, Charles Thomas Mullins, and his sister Mary Gail Anderson predeceased him as well as his father Robert Sr., his mother Erlene, and his beloved stepmother Nell. In lieu of flowers, the family requests donations be made to Save a Man Ministry Inc. which will continue to be run by Kenny’s wife Cathy and its board of directors. P.O. Box 54639, Jacksonville, FL 32245 or on SAM’s website, Saveaman.org, using PayPal or credit card. A memorial service will be held on May 15, 2021 at 1:00 pm at River City Church, 7950 Belfort Pkwy Jacksonville, FL 32256. Should you have any questions or request as far as preparing or bringing something for the family or the reception following the service, please contact Kathi Smith at [email protected] Please also send any pictures of yourself with Kenny or stories about Kenny to [email protected] Those who can't attend the service in person may remotely attend at the following link: https://youtu.be/Fn1dZLMzz7Q

Kenneth L. Cofield of Jacksonville, Florida was known to others as Kenny, Big Dog, Papa, Darling, Kenny Bear, Super Jit, The Man Without Shoes, Kenny the Real Deal Cofield, and Dad. He we home to be with the Lord on April 23, 2021 at 7:45am.... View Obituary & Service Information

The family of Kenneth L. Cofield created this Life Tributes page to make it easy to share your memories.

Kenneth L. Cofield of Jacksonville, Florida was known to others...

Send flowers to the Cofield family.