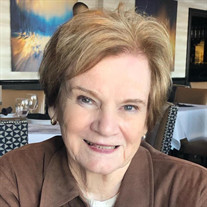 Judith Lynn Kiss-Beehner passed away on Friday, August 6, 2021, at age 81 due to Covid. For donations: https://gofund.me/7683ae37. Judy was born in Toledo, Ohio to Julius and Dorothy Kiss. She was the middle child between her older brother Bob and younger brother Jim. She attended Clay High School and graduated in 1958 – she was the Homecoming Queen. After high school she attended Bowling Green State University and joined Alpha Xi Delta Sorority – she was crowned their May Queen her senior year. Judy graduated with a degree in Education in 1962. She and her best friend (since kindergarten) Ginny taught for one year and saved all their money to travel to Europe in the summer of 1963. They traveled by ship because they were afraid to fly. While onboard the ship Judy met her future husband, John Beehner, who was traveling alone and boldly planned to hitchhike his way through Europe. Much to Judy’s surprise, John kept showing up everywhere she went. When they returned to the states, John courted her. She was in Ohio teaching and he in Illinois. He showed up on her doorstep one day and told her they were getting married. She always emphasized that it was not a question. She admired his decisiveness. Judy was raised by her loving parents on a farm which she often reminisced about with great joy. She often said there was no better way to grow up – although she did not enjoy gathering the eggs from the hen house because they would peck her relentlessly. Judy’s mother was one of 8 children and her father was one of 6. Her childhood was filled with wonderful memories of family gatherings after Sunday church. Confession was at 5:30 on Saturday evenings – if you didn’t go - you did not receive communion the next day. She said you had to be careful not to sin on Saturday night. Her love for the miracle life started on the farm. She always said that children should have pets and watch the miracle of birth. In the notes she left behind for us she wrote that her greatest accomplishment in life was giving birth to four children. Her love for her children was transferred to the many students she taught over the years – at San Jose Catholic and at Wesconnett Elementary and Stonewall Jackson. Leaving San Jose to continue her ministry to serve the needy – she changed children’s lives… and I had the privilege of seeing that firsthand when I taught alongside her at Wesconett Elementary. Once health issues forced her into retirement, she was blessed with grandchildren that she adored while at the same time caring for her own mother in her home who had Alzheimer’s. She refused to put her mother in a home – that lasted three years. If Judy wasn’t busy, she wasn’t happy. After her mother passed, she volunteered at the Women’s Help Center in effort to protect the unborn. She met an inspiring co-worker and together they decided Jacksonville could use another center to protect the unborn. They named it Lifeline Resources and were able to open the center with the generosity of Ramzy Bakkar - who allowed them to open rent-free. She was driven by this new mission to save lives and help struggling mothers. She enlisted the help of many, including her grandchildren, and today it is part of her legacy. Judy was a wonderful daughter, sister, sister-in-law, wife, mother, and friend. She was a light to all. Judy is survived by her oldest brother Bob, her husband John, children Stacey, Kelly, Christy, and Johnny. She was blessed with 7 grandchildren who became the lights of her life: Jordan 25, Cassie 22, Jack 19, Madeline 17, Caroline 11, Elizabeth 9, and John 7. Judith Lynn Beehner, you will be terribly missed and never forgotten. There will be a Funeral Mass at 11:30 a.m. at San Jose Catholic Church on Saturday, August 14, 2021. Due to Covid restrictions there will not be a reception. The family will have a private burial. For donations: https://gofund.me/7683ae37

Judith Lynn Kiss-Beehner passed away on Friday, August 6, 2021, at age 81 due to Covid. For donations: https://gofund.me/7683ae37. Judy was born in Toledo, Ohio to Julius and Dorothy Kiss. She was the middle child between her older brother Bob... View Obituary & Service Information

The family of Judith Lynn Kiss-Beehner created this Life Tributes page to make it easy to share your memories.

Send flowers to the Kiss-Beehner family.