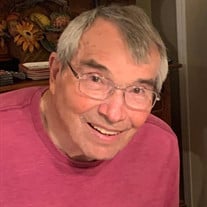 John Cobin Wood, Jr passed away peacefully on February 17, 2022 with his loving family by his side. John was married to Shirley, his loving and dedicated wife of 36 years. John was born in Charleston, South Carolina on November 28, 1937 to John Cobin Wood, Sr and Margaret Elizabeth Cadden Wood. John honorably served in the Army Airborne Battle Group as a paratrooper, from 1955 to 1958 at Fort Campbell Kentucky. John relocated to Jacksonville in the late 1970’s to be with his family and for his love of fishing. John was a Master Technician with Matheny Imports retiring after many years of dedicated service. John’s love of fishing started as a young boy on the Edisto River in Charleston County South Carolina. His passion for fishing continued as an adult. Later in life he started shore/surf fishing and loved to serve his family his catch having large gatherings on his back porch for fish fries. He was an active member of the fishing club “Florida Surfcasters”. John was a wise and gentle soul, a simple man and a role model to many. He spent much of his time watching the wildlife from his back porch. He always made sure his bird feeders were full and there was food on the dock for his ducks. John is survived by his wife Shirley Duke Wood, his children Tony Lee Wood, Elizabeth Dianne Spicer (Gray), Gregory Clark Gunter (Nancy), Tammy Gunter Sachs (Michael) and his loving and caring daughter-in-law Dawn Curtiss Wood. Grandchildren Chad Cobin Spicer, Sarah Ann Wood, Stephanie Lynn Wood, Jamie Gunter, Celia Gunter, Jeremy Gunter, Christopher Gunter (Kristen), Emily Sachs, Gregory Sachs, and Christina Hutchens Rapadas (James). Great grandchildren Erin, Luke, Owen and Ethan. Many nieces and nephews. His devoted and loving sister Winnie Wood Witt. His very best friend and fishing buddy Wendell Nolan. John was predeceased by parents John and Margaret Wood, brother Joseph P. Wood, and grandson Cole Martin Spicer. Visitation will be at Corey-Kerlin Funeral Home on Cesery Blvd. Thursday February 24, 2022 from 5:00pm –7:00pm Funeral Service will be at the Jacksonville National Cemetery Friday February 25, 2022 at 9:30am

John Cobin Wood, Jr passed away peacefully on February 17, 2022 with his loving family by his side. John was married to Shirley, his loving and dedicated wife of 36 years. John was born in Charleston, South Carolina on November 28, 1937 to... View Obituary & Service Information

The family of John Cobin Wood Jr. created this Life Tributes page to make it easy to share your memories.

Send flowers to the Wood family.