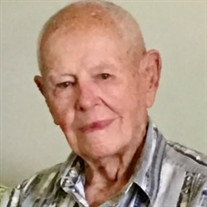 John Edgar Shippey, Sr. passed away at 101 years of age on July 2, 2021. He was born in Point, Texas near Caddo Mills, on June 22, 1920, to Lovick Pierce Shippey and Willa Estelle Quattlebaum Shippey. He was preceded in death by Justine Sistrunk Shippey, his loving wife of 75 years, a son, Dr John Edgar Shippey, Jr., (Deanna) and 12 brothers and sisters. J.E., as he was affectionately known by family, is survived by four daughters, Sandra Shoemaker (Vaughn), Patricia Stores, Mary Cade (Robert) and Martha Hartmann (Robert), 13 grandchildren, 16 great-grandchildren, two great great- grandchildren, and many nieces and nephews. In 1927, J.E. and his family moved cross country in a Model-T truck from Texas to Colquitt, Georgia. Most of his childhood was spent in Colquitt, where he excelled as a football player and athlete at Miller County High School and earned the nickname “Cat” Shippey. He attended college in Americus, Georgia. J. E. spent most of his adult life in Jacksonville except for a few years farming and operating a small dairy near Morgan, Georgia. Having grown up during the Depression, he was always striving to improve himself throughout his life. Shortly before World War II, he left Colquitt and moved to Jacksonville to work in the Jacksonville shipyards, where he continued to work throughout the war as part of the war effort. It was in Jacksonville that he met and married Jacksonville native Justine Sistrunk. After the war, he was a self-employed North Jacksonville businessman, first in roofing and sheet metal work and later on in heating and air-conditioning and LP gas. J.E. had many interests and accomplishments. He was a member of the Jacksonville Track Club, an avid reader, gardener, beekeeper, enthusiastic clogger, and a craftsman of artisan wooden bowls. In addition to making the wooden bowls which he and his wife Justine sold through various shops and at craft shows, he also learned to rewind small motors late in life. He was a Mason and a longtime member of Garden City United Methodist Church. J.E. loved his family. He was greatly loved and will be dearly missed. Services will be held at a later date.

John Edgar Shippey, Sr. passed away at 101 years of age on July 2, 2021. He was born in Point, Texas near Caddo Mills, on June 22, 1920, to Lovick Pierce Shippey and Willa Estelle Quattlebaum Shippey. He was preceded in death by Justine Sistrunk... View Obituary & Service Information

The family of John Edgar Shippey created this Life Tributes page to make it easy to share your memories.

Send flowers to the Shippey family.