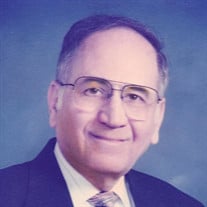 John Vincent Ossi, age 93, passed away on April 15, 2022 surrounded by his loving family. He was born on October 12, 1928 to Aziz and Hayett Ossi and was a lifelong resident of Jacksonville. John is survived by Sue, his beloved wife of 65 years, four children, Diane Smowton (Jeffrey), Michael Ossi (Julie), Lisa McCall (James), Donna Smith, twelve grandchildren and two great grandchildren. He is also survived by his three siblings, George (Jackie), Josie, Julia (Fareed) and many nieces and nephews. He was predeceased by his parents, brother Jimmy and sister Jeanette. Born just a year before the Great Depression, John endured incredible hardship; he delivered newspapers during World War II and worked tirelessly in the family grocery store business until he decided to be the first family member to attend college. John earned a pharmacy degree from the University of Florida, and after passing his boards, was drafted into the Army during the Korean War. He worked for two years at Letterman Army Hospital in San Francisco, California. After returning to Jacksonville, John met and married the love of his life, Sue. Pharmacists John and his brother George opened Ossi’s Apothecary on Hendricks Avenue in 1957. Their business expanded in 1973 to include a second location at Deerwood Village Mall. During his 65-year career, John was blessed to have worked alongside his brother George, daughters Lisa and Donna (pharmacists), his wife Sue and cousin Alice Kapperman. John was also proud to have served as an active member, Eucharistic Minister, and Lecturer at Assumption Catholic Church for over thirty years. The lives that he impacted will continue to influence those in his community for generations to come. The family will receive friends at Holy Family Catholic Church, 9800 Baymeadows Road, Jacksonville, Florida, at 11:00 am on Saturday, April 23rd, followed by a Mass of Christian burial at noon. There will then be a graveside service at Oaklawn Cemetery at 3:30 pm. Funeral arrangements by Corey-Kerlin Funeral Home, 940 Cesery Boulevard, Jacksonville, FL 32211, (904)744-8422

John Vincent Ossi, age 93, passed away on April 15, 2022 surrounded by his loving family. He was born on October 12, 1928 to Aziz and Hayett Ossi and was a lifelong resident of Jacksonville. John is survived by Sue, his beloved wife of 65... View Obituary & Service Information

The family of John Vincent Ossi created this Life Tributes page to make it easy to share your memories.

Send flowers to the Ossi family.