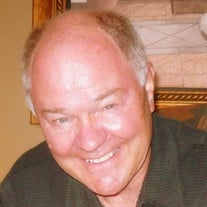 On March 16, 2021, our beloved John Perry Fisher passed from earthly Sorrow to Eternal Joy to be with the One who created him, saved him and sustained him, Jesus, The Christ. A celebration of his life, interment of ashes with full Air Force Honors will be held on Saturday, March 27, 2021, 10:00am at St. Andrew’s Episcopal Church, 7801 Lone Star Road, Jacksonville, FL 32211. Please join us for a reception immediately following the service at Hidden Hills County Club where all will have an opportunity to share fondest memories of John. In lieu of flowers, the family requests donations be made to St. Andrew’s Episcopal Church or Community Hospice & Palliative Care, 4266 Sunbeam Road, Jacksonville, FL 32257. John was born on December 8, 1940 to John and Mildred Fisher in Hartford, Connecticut. He has two siblings, a sister, Donna Y. Fisher and brother, Stephen Hill Fisher (Carlynne). His legacy lives on through his family, his loving and devoted wife Johnnie Beth Fisher, his soulmate and best friend of 56 years; son, John Perry Fisher, Jr. (Mindy) and their children, Daniel Edward Fisher, Matthew Perry Fisher and Shelby Ader; daughter, Jill Fisher, her sons, William Wilder (Eiizabeth), and Gaige Wilder (Brittany); son, Stephen Fisher (Shanna). His exemplary career “moving planes” began in 1962 when he joined the United States Air Force and continued on with the Federal Aviation Administration for the next 42 years concluding with his service and leadership as President of the FAAMA. John’s life was characterized as a believer and follower of Christ, the one who created him, saved him and sustained him to the end. He and his family were lifelong members of St. Andrew’s Episcopal Church. His life-giving spirit was contagious and his servant heart exemplified his walk with Jesus Christ. The Cursillo Renewal made a significant impact on his and Johnnie’s life. They both served on many teams for Christ over the years. John served as Rector of Cursillo #100 in the Episcopal Diocese of Florida. John’s legacy remains in the hearts of all who loved and were loved by him. #blessedandhighlyfavored

On March 16, 2021, our beloved John Perry Fisher passed from earthly Sorrow to Eternal Joy to be with the One who created him, saved him and sustained him, Jesus, The Christ. A celebration of his life, interment of ashes with full Air Force... View Obituary & Service Information

The family of John Perry Fisher created this Life Tributes page to make it easy to share your memories.

Send flowers to the Fisher family.