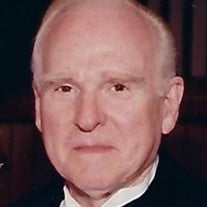 John Madison Crump Jr., 89, passed peacefully on December 10, 2020. He was born in Chesterfield County, VA on July 9, 1931, to John and Ouida Crump. He was a longtime resident of Jacksonville, FL, and worked for Reynolds Smith & Hills for over sixty years. Even after retirement, he could still be found in the early morning hours in his RS&H office immersed in the engineering field that he loved so much and enjoying the comradery of fellow employees. John received a Bachelor of Science in Mathematics from Jacksonville University, beginning his career as an engineer with RS&H in Huntsville, AL. Although his projects varied, some of John’s greatest accomplishments were for NASA and he always felt lucky to be part of the space program during its heyday. Notable achievements include contributing to NASA’s Apollo and Saturn V programs by working on design of the original mobile launcher and launch pads that rocketed astronauts Armstrong, Aldrin, and Collins into space. He also worked on the retrofit of the Launch Complex 39 A&B and Mobile Launchers 1, 2, and 3 for the Space Shuttle. In addition to his engineering accomplishments with NASA, John held multiple patents. Most notable of his inventions was a device that held your skis, boots and poles conveniently together called Skeefre. He and his family were avid snow skiers and spent many Christmases on the slopes in North Carolina and Colorado. John was also the creator of a series of educational videos, Your World Productions, that he filmed with the love of his life, Dianne. Additionally, he proudly served in our military as a paratrooper during the Korean War and held a deep love for his country. While in Huntsville, John met and married Dianne Colle, a schoolteacher from Pascagoula, MS. They had three children Mary Margaret, John, and Elizabeth. With much sadness, John lost his wife, Dianne, in 1995 and his oldest daughter, Mary Margaret Taylor in June 2020. John is survived by his children John Crump III (Lorie), Elizabeth Smith (Derrick) and four grandchildren John IV, Cole, Katie, and Dianne. John always said he had a “long and wonderful journey” which is validated through his lifetime achievements. He will be deeply missed and warmly remembered for his energy, integrity, intellect, ability to fix anything, green thumb, witty jokes, knack for storytelling, dolling words of wisdom (requested or not), investment advice, frugal ways, and his penchant for producing info filled three ring note binders. All his sayings, advice, and teachings will live on through those that knew and loved him. Due to the COVID-19 pandemic a memorial service may be planned at a future date.

John Madison Crump Jr., 89, passed peacefully on December 10, 2020. He was born in Chesterfield County, VA on July 9, 1931, to John and Ouida Crump. He was a longtime resident of Jacksonville, FL, and worked for Reynolds Smith & Hills for... View Obituary & Service Information

The family of John Madison Crump Jr created this Life Tributes page to make it easy to share your memories.

Send flowers to the Crump family.