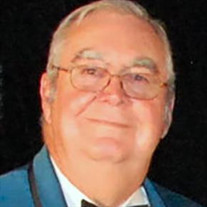 John Thomas “Jack” Coyle, 94, passed away peacefully on February 10, 2021. Husband of Anne Reilly Coyle, Jack was born June 17, 1926, in Jacksonville, Fla., to George P. and Mary Dineen Coyle. He attended St. Paul’s Catholic School and graduated from Bolles Military Academy in 1944, entering the service immediately afterward. He served in the Pacific with the United States Navy in the Seabees and was honorably discharged at the close of WWII. He was proud to serve his country, and his love for country continued all his life. Jack attended Georgetown University in Washington, D.C., and then worked in the family business, George P. Coyle and Sons, for 50 years, retiring as Vice President. He could converse with everyone on many different subjects, his favorite being trains. After retiring, he spent time traveling on the trains of his dreams. Jack returned to work two days a week for many years just to keep active, and he enjoyed the companionship of his many friends. He belonged to the Knights of Columbus, American Legion Post 129, and the Sales and Marketing Club and he served as President of the Villages of San Jose Paloma Point Association, Chairman of the Villages of San Jose Architectural Review Board, and Greeter and Martha Committee member at San Jose Catholic Church. Jack loved his Church and faithfully served the Lord. He is survived by his wife, Anne Reilly Coyle, to whom he was devoted for 70 years. He used to say he was the “best boy” because he helped her with many Christian endeavors. He was loved by his children, Mary Catherine Green (Jacob), John Garrett (Cathy), Michael (Jan), John Thomas Jr. (Gina), Anne Clewell (Bill), Elinor Cantrell (Wayne), Mary Clare Coyle, James B. (Peggy), and Patricia Farrell (Tom); his 15 grandchildren and 9 great grandchildren; cousin Jill Soete Scott; and many nieces and nephews who loved him dearly. Jack was preceded in death by his parents and brother, Robert W. (Bob) Coyle. A funeral mass will be held at San Jose Catholic Church on March 5 at 10:30 a.m. In lieu of flowers, please consider a donation to the Seabee Memorial Scholarship Association (SMSA), P.O Box 667, Gulfport, MS 39502, the Elinor Martin Residence for Mother and Child, P.O. Box 28 New Rochelle, NY 10804, or San Jose Catholic Church, 3619 Toledo Rd., Jacksonville, FL.32217. Arrangements being handled by Corey-Kerlin Funeral Home, 940 Cesery Blvd., Jacksonville, FL., (904) 744-8422, www.corey-kerlin.com

The family of John Thomas "Jack" Coyle created this Life Tributes page to make it easy to share your memories.

Send flowers to the Coyle family.