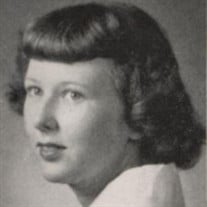 Joanne Elizabeth McHugh Williams, 86, died on February 2, 2021 in Jacksonville, Florida. Joanne was born on October 15, 1934 in Chicago, Illinois to Edmund B. and Rosalind (Evans) McHugh. In 1953, she graduated from Largo Florida High School, and married her high school sweetheart, Richard. After attending the University of Florida, in 1961 the couple and their growing family, which now included daughters Cathy and Diane, moved to Tullahoma, Tennessee where daughter Laura was born the next year. While Richard began his engineering career at Arnold Engineering Development Center (AEDC) developing spacecraft to support the Apollo program, Joanne was active in the community serving as the President of the League of Women Voters, the Tullahoma Women’s Club, the AEDC Women’s Club and the Fun in Flowers Garden Club. She was a member of the First United Methodist Church and was active in the Ladies Circles. She was a devoted mother to her three daughters, and supported them in all of their endeavors including serving as Girl Scout Leader, PTA President, and Swim Team Mom. In 1981, Joanne and Richard moved to Jacksonville, Florida where she was active in the Jacksonville Art Museum (now MOCA). Joanne and Richard traveled extensively with the museum’s travel group where she found her passion for photography by documenting the group’s adventures in print and slide film—often creating slideshows of their excursions. Joanne was a loving and generous wife, mother and grandmother. She was especially involved in the lives of her adored grandchildren, whose love for the arts and travel she helped foster. She was predeceased by her husband of 54 years, Richard B. Williams, her parents, sisters Judith McHugh Johnson, Virginia McHugh Hartwig and Jacque McHugh Eichelman. She is survived by her daughters, Catherine Williams, Diane Williams Helton (Randy), and Laura Williams Dale; five grandchildren, Paige Elizabeth Helton Kragie (Ken), Heath Garrett Helton, Laura Elizabeth (Betsy) Dale, Mary Margaret Dale, John Richard Dale; and three great grandchildren, Blake Riley Kragie, Margaret Emerson Kragie and London Reese Kragie. Private services will be held, and burial will be at Arlington Park Cemetery.

The family of Joanne Elizabeth McHugh Williams created this Life Tributes page to make it easy to share your memories.

Send flowers to the Williams family.