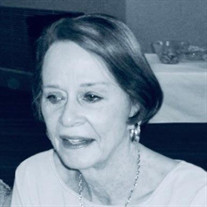 Jane O'Connor Wheeler - On Saturday, October 10, 2020, Jane O'Connor Wheeler, 87, beloved wife of Charles (Griggs) Wheeler, mother of six children, passed away peacefully at noon, surrounded by her family. Jane grew up in Augusta and resided there from 1978 until 2013. Most recently, Jane was a resident of The Legacy at St. John's, St. Johns, Florida, and was attended by nurses from Community Hospice & Palliative Care. Jane was born on Sept. 9, 1933, daughter of Mary O'Gorman O'Connor and Daniel J. O'Connor. She grew up on the 1200 block of Ellis Street, in the heart of the Sacred Heart Irish Catholic Church community, the church being within shouting distance of her home. Her sister Sheila wrote about the neighborhood: "There were front porches on most homes and neighbors spoke to each other on a daily basis. The entire area around the school and church was a true community." Jane developed her lifelong love of learning under the auspices of the Sisters of Mercy at Sacred Heart School. Jane later attended Mt. St. Joseph's High School where she played on the varsity basketball team all four years, was editor of the school newspaper Round the Mount, as well as the Class Valedictorian. Jane attended Mount St. Agnes College in Baltimore, where she studied literature, history, and played field hockey. Her favorite writer was T.S. Eliot, (the family dog was named J. Alfred Prufrock). In 1954, she married the love of her life, Charles Wheeler, a graduate of the Naval Academy, at Sacred Heart Church. As a Navy couple, they travelled all over the United States, with tours of duty in California, Maryland, Virginia, and her favorite tour, Hawaii. Jane was the devoted mother of six children while assuming the many responsibilities of a military spouse. Jane was the consummate host, entertaining military personnel at her home. She was an active member of the Officers' Wives' Club where she provided support and leadership to other wives while their husbands were on deployment. She loved antiques, designing and decorating each of her homes with taste and style. She frequently volunteered at her children's schools and sporting activities: organizing carpools, announcing at swim meets, and cheering from the bleachers at football games. Jane and Griggs retired in the historic Summerville neighborhood in Augusta, where Jane worked for Orthopedic Associates of Augusta. She was a member of the Irish American Heritage Society of Augusta as well as a longtime parishioner of St. Mary on the Hill Catholic Church. Her Irish Catholic heritage was always close to her heart and provided her an ever present compass. She is preceded in death by her parents Daniel J. and Mary (O'Gorman) O'Connor, her sister Patricia (Gordon) Whelan, and her brother Daniel J. (Mary) O'Connor Jr. She is survived by husband Charles G. Wheeler, her sisters Sheila (Doug) Wilson, and Mary (Robert) Leonard, her children Charles (Mary) Wheeler Jr., Dr. Maura Cardwell, Patricia Wheeler, Helen (Crawford) Cole, Michael (Kim) Wheeler and Joan Wheeler. She also is survived by 14 grandchildren and 12 great grandchildren. Donations, in Jane's name, can be made to Community Hospice and Palliative Care, 4266 Sunbeam Road, Jacksonville, FL 32257 or to St. Mary on the Hill Catholic Church, 1420 Monte Sano Ave, Augusta, GA 30904. A Memorial Service will be held at San Juan Del Rio Catholic Church, 1718 SR 13 Jacksonville, FL 32259, on Saturday, November 7, 2020 at 11:00 a.m. Interment will take place in Augusta, GA at a later date. Corey-Kerlin Funeral Homes & Crematory in Jacksonville, FL is handling the arrangements.

The family of Jane O'Connor Wheeler created this Life Tributes page to make it easy to share your memories.

Send flowers to the Wheeler family.