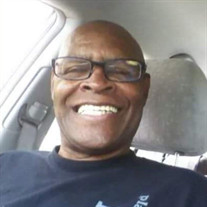 James E. McClain Sr. was born in Asheville, North Carolina on October 31, 1947 to the late Alonzo S. McClain and Evelyn Hill McClain. People called him “TI” a nickname that was given to him when he was in his youth. He was the seventh born child of eight children. He was preceded in death by his parents, his brother’s William H. McClain, Robert McClain. His sister’s Elizabeth McClain and Ella McClain and those family members that have gone on before him. He is survived by Alonzo McClain (Evelyn McClain), Callie Atkins (William Atkins), and Gladys Brown. His children Louise Money, Montreatica Crespo McClain, Jacqueline McClain, James E. McClain Jr., Marvella Hyatt McClain Daughter in-law and Lamont E. McClain. His grandchildren Kiswanna Jeannie Balcolm Smith, Yalynn Money, Jessica Money, Malissa Money, Joshua Money, Sheree Lazada, Orlando Crespo Jr., Isa Hyatt McClain, Aisa McClain, Alanna, McClain, Cameron, McClain, Dreo Ward, Dulani Ward, and his wife Brenda McClain. A host of great grands, nieces, and nephews. He relocated to New Haven, Connecticut at the age of 6yrs old, then relocated to Stamford, Connecticut. He attended the public-school system of Stamford Connecticut. He began his trade as an auto body repair at 18 years old at Mandi Auto Body Shop. He lived in New Rochelle, New York and later moved to Alpharetta, Georgia, then to Jacksonville, Florida. He lived a full life; he was adventurous and shared many life stories. He loved all his children and always gave them his full attention whenever he was called on. His hobbies were cars, fishing, gardening, and music. His favorite songs were The Temptations “Papa Was a Rolling Stone”, Run D MC’s “Christmas Carol”, Martha Reeves & Vandellas “Jimmy Mack”, Stevie Wonder “I Wish”. James E. McClain transitioned to go home with the Lord on October 1, 2020. His children and family would like to thank everyone for celebrating his life with us. Thank you to everyone that donated food, sent flowers and monetary gifts. All those who took the time to call and check in on us, prayed with us and for as. Even as the days, weeks, months, and years ahead of us we covet your prayers. A special thank you to Gladys Browns and Callie Atkins, Thellus Brown, Charlotte Smith, and Mary Noot White for your help. We love you and God bless you. A Virtual Service will be held Monday October 12, 2020 at 12:00 PM. Universal Outreach Ministries 66 Harriet Street Bridgeport, Connecticut 06608. Memorials may be sent to this address.

James E. McClain Sr. was born in Asheville, North Carolina on October 31, 1947 to the late Alonzo S. McClain and Evelyn Hill McClain. People called him &#8220;TI&#8221; a nickname that was given to him when he was in his youth. He was the seventh... View Obituary & Service Information

The family of James E. McClain Sr created this Life Tributes page to make it easy to share your memories.

Send flowers to the McClain family.