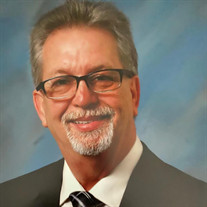 PADGETT - James “Jimmy” R. Padgett of, Jacksonville, Florida, born June 30, 1956 passed away peacefully on September 9, 2020 after a brief illness. He is survived by his wife, Lynette “Tootsie” Johnson; his beloved pups, Lexus, Hammer, and Bella; his sister, Mary Jane Zipperer; his daughters, Rachel Heyman (Jason), and Aleshia Coppage; step-children, Jim Johnson, Jamie Ashe, and Dana Johnson (Nick); grandchildren, Sidney Heyman, James Heyman, Megan Hull (Matthew), Ryan Yarborough (Gabby), and Audrey Johnson; great-grandchild, Maggie Hull; aunt, Helen Wilson; niece, Jessica Kember (Mike); and a host of extended family members. Jimmy attended Andrew Jackson High School and graduated in 1974, after a handful of years he began his lifelong career with the Jacksonville Electric Authority (JEA) and retired in 2013. Throughout his years with JEA he met and worked alongside amazing people who he kept as close friends for the duration of his life, he always spoke fondly of his coworkers and the people that mentored him along the way and regarded them in the highest esteem. Jimmy met Tootsie in 1968 in the 7th grade and they remained friends for 43 years before marrying in 2011. Together they embarked on a journey that would lead them to fulfilling his dream of retiring to his very own slice of paradise in Welaka, Florida where he could turn the TV up as loud as he wanted and no one complained, spend his days leisurely lounging with his precious pups, or boating and enjoying every moment of his time with the love of his life. In his later years, after retiring, Jimmy made the decision to serve as a Master Mason with the Arlington Masonic Lodge #309 in Jacksonville, Florida where he served from 2012 until his passing, during his tenure he also served as the Master of The Lodge in 2017. In addition to his service as a Master Mason he served as a member of The Morocco Shriners from 2012 until 2019 in the Spitfire Unit where he was a volunteer fundraiser for the Shriners Hospitals for Children. A Memorial Service will be held in Jimmy’s honor at a date and time to be announced. In lieu of flowers the family asks that donations be made to Friends of Jacksonville Animals.

The family of James "Jimmy" R. Padgett created this Life Tributes page to make it easy to share your memories.

Send flowers to the Padgett family.