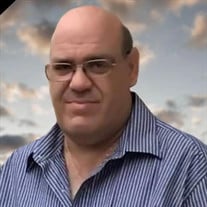 Jack Jacob Albert, born August 3,1967 in Jacksonville, Florida departed this world to his heavenly father on October 24, 2021. He was born to Louis(Elias) Yazji Albert, Jr. and Mary Antoinette Yazji. Jack is survived by his loving wife Bernadette, his daughter Mary, his mother, Mary, his sister Claudia, his brothers Elian and George, his nieces Nicole, Rita, Lana, Renee, Rachel, and Ella, his nephews Michael, Louis and Abraham, his mother-in-law Mary, sisters-in-law Najlaa, Esperanza, Fadia, and Thuraya, brothers-in-law Adonis and Fadi, as well as numerous extended family members. Jack was predeceased by his father Louis(Elias). Jack was raised in Jacksonville, Florida. He was a Terry Parker High School graduate. In 2007, he married the love of his life Bernadette. He was a proud father(Baba) to their beautiful daughter Mary. He worked hard as a grocer and took pride in owning his own business, where he was loved and respected by all. Jack was a kind-hearted, fun and loving man. Jack had such a unique sense of humor. He always made you laugh. He enjoyed cooking out and most of all spending time with his family. He was a blessing to all who knew him. He was incredibly loved by his family and friends and will be missed.

The family of Jack Jacob Albert created this Life Tributes page to make it easy to share your memories.

Send flowers to the Albert family.