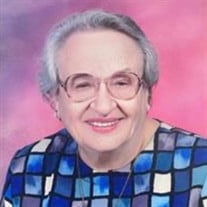 Hilda Bean Cowsert passed away peacefully on November 6, 2021. She was surrounded and supported by her loving family during the last days of her life. She was born on October 14, 1928, in Granite Falls, North Carolina. Her father, who passed away when she was 16 months old, once prayed in a cottage prayer meeting that one of his children would go into full-time Christian work. Hilda was the answer to that prayer as she served as a missionary with the International Mission Board for 41 years in Brazil, retiring in 1993. She prepared herself for service by receiving an AA degree from Mars Hill College in 1947 and a BRE in 1952 from Southwestern Baptist Theological Seminary. As newlyweds, she and George were appointed as missionaries to Brazil on July 10, 1952. While George did field evangelism, Hilda worked with the local churches, raised a family, and was very involved with the state and national Brazilian Women’s Missionary Union (WMU). She and George lived and worked in Campinas, São Paulo; Santa Maria, Rio Grande, and Porto Alegre, Rio Grande do Sul; Goiânia, Goiás, and Vitória, Espírito Santo, where George died. She served on the Executive Committee of the Brazilian Baptist Convention as WMU director for the states of Goiás and Espírito Santo as well as the Executive Committee of the Brazilian WMU. She wrote for all their periodicals and wrote a book on storytelling, which was one of her many talents. She taught Religious Education at the seminary in Espírito Santo. Following George’s death in 1986, she moved to Rio de Janeiro where she became the Secretary of Promotion of the national WMU. God used her to computerize the Brazilian WMU in the 80s. She also taught in the Women’s Training School. She is survived by four children (and spouses): Naomi Key (Jay) of Fort Worth, TX, Norma Anderson (Roy) of Jacksonville, Florida, Elena Key (Guy) of Rio de Janeiro, Brazil, Jack Cowsert (Kim) of Zebulon, North Carolina. She is also survived by seven grandchildren (and spouses): Elaine Anderson Sheldon (Dave), Jonathan Key (Erin), Wesley Anderson (Lauren), Cristina Key, Vanessa Key da Cruz (Lucas), Kathryn Cowsert, and Jackson Cowsert. She is survived by eight great-grandchildren as well: Naomi, Rebekah, David, and Daniel Sheldon; Nathan, Anya, and Samuel Key; Bella Key da Cruz; Brazilian “daughter” Lasara Oliveira Tavares (Divino and children, Eduardo and Cristina) from Vitória, Espírito Santo, and Brazilian “grandson” Enéas Thompson Júnior (Nilda). She was preceded in death by her husband of 34 years, George Bagby Cowsert, her father and mother, Edgar Roy Bean and Naomi Bean Helton, sister, Helen Short, and brothers, James and Edgar Bean. Hilda’s life verse was Philippians 4:13: I can do all things through Christ who strengthens me. Visitation will be held on Thursday, November 11, 2021, at 10:00 a.m., followed by a celebration service at 11:00 a.m. Location: Holiday Hill Baptist Church, 730 Mandalay Road, Jacksonville, FL 32216. Flowers or plants will be received with love. In lieu of these, donations in her memory may be made to the International Mission Board (imb.org).

Hilda Bean Cowsert passed away peacefully on November 6, 2021. She was surrounded and supported by her loving family during the last days of her life. She was born on October 14, 1928, in Granite Falls, North Carolina. Her father, who passed... View Obituary & Service Information

The family of Hilda Bean Cowsert created this Life Tributes page to make it easy to share your memories.

Send flowers to the Cowsert family.