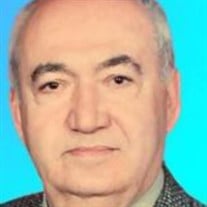 Hikmat Naiem Aljallo July 1, 1938 – September 24, 2021 On the morning of Friday, September 24th, Hikmat Naiem Aljallo passed away peacefully in his sleep, age 83, next to his wife of 51 years of marriage, Suhaila Saadallah Aboodi Shino. Hikmat was born in Mosul, Iraq, and completed his Bachelor of Science degree in Chemistry from the College of Science at University of Baghdad. He obtained an educational scholarship to complete his post-graduate studies abroad. He earned his Master and Doctorate degrees in Organic Chemistry at Imperial College of Science and Technology at the University of London. He then moved back to his country where he became an Assistant Professor at the University of Mosul. Six years later, he was designated as the Head of Scientific Researchers and Deputy Director General at the Atomic Energy Commission. He was then hired on for the Director of Industrial Chemistry Research Center role at the Military Industrial Commission (MIC). He was promoted a year later to become the Director General of Ibn Sina General State Company at the MIC. In addition to his exceptional professional profile, he was well-known to be one of Iraq’s greatest scientists due to his continued contributions to scientific research and the advancement of his country. Proceeded in death by his father, Naiem Aljallo and mother, Mayala Karoomy, Hikmat is survived by his wife, Suhaila Saadallah Aboodi Shino, daughters, Rawaa Naeim and Reem Naiem, five grandchildren who adored him: Haya, Sama, Lara, Tara, and Zaid. His extended family includes several cousins and special professional colleagues who remained devoted to him for decades. Hikmat’s family, friends, and colleagues have always praised his wisdom, modesty, and generosity. He was a humanitarian and loved people of all backgrounds. Hikmat was a role model for his family in all life aspects. We will continue to live by his example and keep his legacy alive. We will certainly miss his presence in our lives, but he will always remain in our hearts.

The family of Hikmat Naiem Aljallo created this Life Tributes page to make it easy to share your memories.

Send flowers to the Aljallo family.