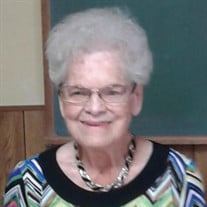 Rowe- Helen Claire Rowe went to her heavenly home on March 18, 2021 at the age of 98 1/2 Born in Deland, Florida on September 10, 1922, daughter of John W. Coppen and Ethel Irene Davis. Helen moved to Jacksonville, Florida in 1939, graduated from Andrew Jackson High School in 1940, she worked at several of the older department stores in downtown Jacksonville. She was a hard worker where she worked, and finally retired from Gulf Life Insurance Company, after 30 years of service. She is preceded in death by her parents, her sisters, Elaine Graf and Edith Quessenbery, and two brothers, John W. Coppen, Jr. and Walter Davis Coppen. She was the only surviving member of her family. Helen is survived by her only daughter, Joan Wagner (Richard), 2 grandchildren, Rick Crook (Sherree), Denise Crook Wright (Alan), 7 great grandchildren, 7 great-great grandchildren, and numerous nieces and nephews. She also has an extended family, Jeff Wagner (Wendy), Kurt Wagner (Rachel), Kathy Grunder (Mike), Victoria Wagner, Kyle & Devin McCormick. Her family was her pride and joy. She was a member of Arlington Assembly of God/Destination Church for many years, and due to her declining health, attended Ft. Caroline Christian Church with her family. The most important legacy she leaves; she was a Women of Fath, a “Role Model” and Christian example to those around her. Because of her failing eyesight, she was unable to read her bible, but was able to listen with the audio books for the blind. Our family has been truly blessed by God to have her in our lives. She will be missed greatly and is irreplaceable.

The family of Helen Claire Rowe created this Life Tributes page to make it easy to share your memories.

Send flowers to the Rowe family.