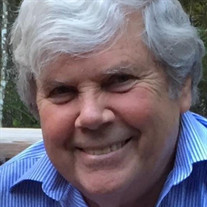 Harry Wilson Wise, 73, of Jacksonville, Florida, passed away peacefully on February 19, 2021. Born November 13, 1947 in Butler County, outside of Pittsburgh, Pennsylvania to the late Herbert and Helen Wise. He completed his education and then went on to serve in the US Navy. He had an extensive career in computer technology in the banking industry and then accepted a job in 1981 with Atlantic Bank, now known as Wells Fargo. His career brought him to Jacksonville where he met his wife, Kay, and they were married in 1988. After being involved with several churches in the area, they found their church family at Southpoint Baptist Church. Harry was currently serving a second term as a deacon and was a dedicated servant in all capacities at the church. Harry and Kay loved football and enjoyed many years of supporting the Jaguars and the Seminoles. They travelled extensively and particularly loved tropical locations. He was a special friend to many people. He loved the church and people and it was evident every Sunday morning as he greeted them with a handshake or a hug they loved Harry also. Mentioning the things that Harry loved, from the moment that Donald Trump announced his candidacy for President, Harry became his #1 fan and he never wavered from his support. Harry is survived by his wife Kay of 33 years, brother Don (Mary) Wise, and sister Lavaughn (Norman) Hawn. Kay’s family had adopted Harry as part of their family as well, so her sisters Jeannie (Sam) Sasser and Anita (Charlie) King, and many loving nieces and nephews also mourn his loss. A celebration of his life will be held at Southpoint Baptist Church, located at 3335 Tiger Hole Road in Jacksonville on Friday, February 26 at 1:00. Viewing will be held at the same location on Thursday, February 25 from 5:00 - 7:30 p.m. Harry will be laid to rest in the family plot at Bethel Cemetery in Hilliard, Florida. The obituary will also be on the Corey-Kerlin.com website where you may leave a message for loved ones. Masks will be required at visitation and at the funeral.

Harry Wilson Wise, 73, of Jacksonville, Florida, passed away peacefully on February 19, 2021. Born November 13, 1947 in Butler County, outside of Pittsburgh, Pennsylvania to the late Herbert and Helen Wise. He completed his education and then... View Obituary & Service Information

The family of Harry Wilson Wise created this Life Tributes page to make it easy to share your memories.

Send flowers to the Wise family.