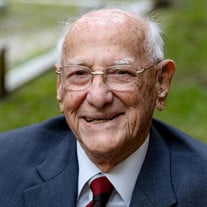 Harris Earl (Harry) Geerlings, 98, passed away peacefully at his home with his family by his side on November 22, 2021. He was born August 6, 1923 in Holland, Michigan to Clara Maatman Geerlings and John Geerlings. Harry was predeceased by his wife of 67 years, Mary Quattlebaum Geerlings, who was the love of his life. Harry graduated from Holland High School in Holland, Michigan and immediately enlisted in the Marine Corps to proudly serve his country during World War II and the Korean War. During this time, he served in the Pacific Theatre and later achieved the distinguished rank of Sergeant. After being honorably discharged, he completed his Bachelor’s Degree in Accounting from Davenport University in Grand Rapids, Michigan and relocated to South Carolina upon graduation to work for the General Electric Company. He later met Mary Evelyn Quattlebaum and on November 4, 1949, they married in Columbia, South Carolina. For the next 35 years, Harry proudly worked for the General Electric Company in the Major Appliances Sales Division and was responsible for supplying all major appliances to the majority of the high-rise condominiums that now stand along the coast from Miami to Palm Beach. He held various leadership positions while working in South Carolina, South Florida, and Jacksonville. Harry was passionate about the game of golf, achieving four holes-in-one and shooting his age many times while in his seventies and eighties. He also was an avid woodworker and gardener. Harry was also a man of strong faith and was an active member of Parkwood Baptist Church and his Sunday School class for over 40 years. His humor, honesty, integrity, and positive outlook will be missed by all who knew him. Harry was survived by his daughter Nancy Geerlings Barnes (Wade); two grandchildren Charles Thomas “Chip” Tinsley, IV (Katie) of Atlanta, GA and Allison Tinsley Smith (Brendon) of Tampa, FL; three great-grandchildren Davis, Mae, and Emma Kate Tinsley of Atlanta, GA; several nieces and a nephew; his dedicated nurse and friend Edlyna Reser; his sheltie Scarlett that he referred to as “his little sweetheart”, and other loving family and dear friends. Harry had two sisters who preceded him in death, Dorothy Geerlings Kamps and Pauline Geerlings Hiddinga of Holland, Michigan and a brother, John Geerlings, Jr. Funeral services will be held at 10 am Friday, November 26 in the Chapel of Corey-Kerlin Funeral Home, 940 Cesery Blvd Jacksonville, FL. Prior to the service the family will receive friends from 9 am until 10 am at the funeral home. Burial with full military honors will follow in Oaklawn Cemetery, 4801 San Jose Blvd. Memorials may be made to Tunnel to Towers Foundation ( t2t.org ) in memory of Harris E. Geerlings. Zoom Meeting Code: 899-0640-8726

Harris Earl (Harry) Geerlings, 98, passed away peacefully at his home with his family by his side on November 22, 2021. He was born August 6, 1923 in Holland, Michigan to Clara Maatman Geerlings and John Geerlings. Harry was predeceased by... View Obituary & Service Information

The family of Harris Earl (Harry) Geerlings created this Life Tributes page to make it easy to share your memories.

Send flowers to the Geerlings family.